The last night of a holiday is often the worst – longing for the trip to continue, trying desperately to make the most of what little time is left, feeling sad. Not us! I think it was one of my favourites.

Before we got to Bangkok I discovered that our flight home had been delayed about 8 hours, which meant that we were leaving at 5pm Saturday and getting back 8:30 Sunday morning rather than late Saturday night. A bit of a bummer because I had work the next day but it did mean half a day spare to go back to Chatachuk markets – my favourite!

We got into Bangkok late in the afternoon on Friday and I’d booked us a hotel near Don Muaeng Airport – DMK (the one we’d be leaving from) but our flight got into Suvarnabumi (BKK). Fortunately there was a free transfer bus, we just had to show proof that we were flying out of there. Lucky we took the bus because it was quite a long trip. From the airport we took two taxis to our hotel, the Pool House Service Residence. I have no idea why something so shabby had such a fancy name, but the pool itself was fine, even if the rooms had quite a lot of ants. 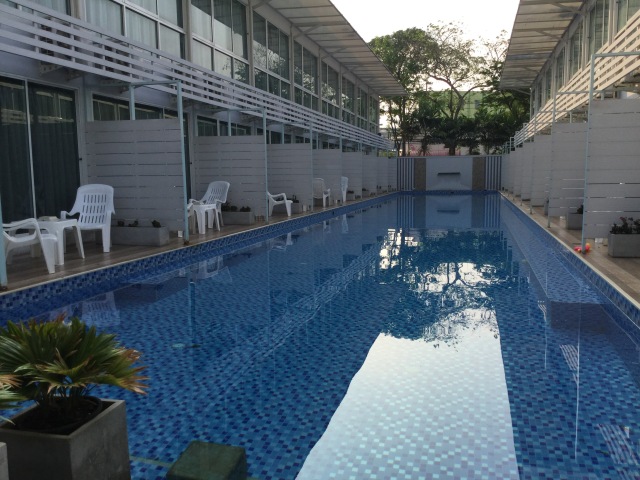 As we drove through the streets near the hotel Songkran was in full swing. Techno music blaring, hoses and buckets full of water being thrown over mopeds full of shivering girls and boys – it was a much livelier Bangkok than we’d seen in the more upmarket areas. It felt more fun.

After we settled in and had a swim we decided to go out and find some food. We took a few turns and were walking down a street when we hear ‘Hey! You! Where are you going?’. We looked over to see a bunch of people in the front courtyard of a house sharing a meal. One of the men is calling out to us in a friendly way so we went over. I must admit that seeing how open my brother and Matt were to meeting new people in Vietnam really made me think about taking advantage of friendly locals and getting into conversations. We told him we were looking for somewhere to eat and he said that there wasn’t anything in the direction we were heading, and he took us a few doors down to a street food place full of locals. He explained to the cook that we had one vegetarian in the group and sorted us out and told us to come back to his place after dinner for a drink.

Dinner was pretty good – meat and vegetables in various combinations with rice. The price was especially good at around $2 for a plate. Sledge found his too spicy, but apart from him we all enjoyed it and decided to head back to the man’s house. It turned out to be a great idea and he introduced himself as Yu, a Malaysian man who had lived in Miami and married a Thai girl. We met his wife, An, and his family-in-law. He had a friend in Adelaide so we talked about Australia a bit and shared stories, some of which were downright hilarious.

We headed off after about an hour and a half, not wanting to outstay our welcome. It had been a pleasure to get to know someone who could answer our questions about Thai culture and was so kind and generous. 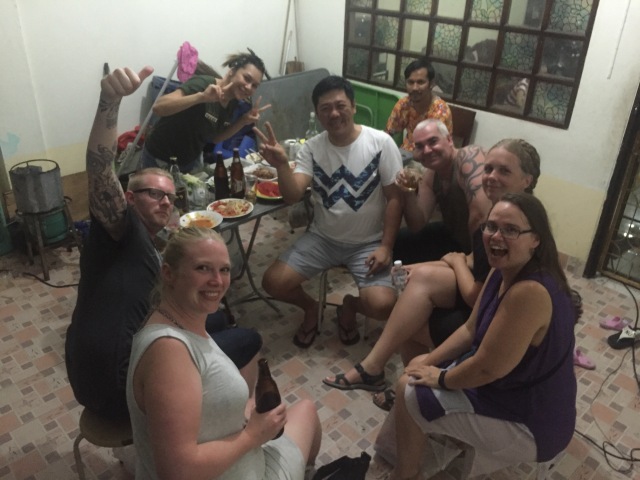 The next morning Luke, Lauren, Charmaine and I took an Uber to Chatachuk and met up with Lucas (he was working in Bangkok for the month). We only spent a couple of hours there but found some good bargains and saw bits of the market we hadn’t seen two weeks ago. It was just as hot and stuffy as the previous visit but I felt as though I wasn’t as tired – maybe we’d started to acclimatise. Charmaine certainly enjoyed it more without the thick brace she’d had to wear for her shoulder.

Among other things, I bought jewellery, wooden serving spoons, an apron made of Thai fabric and a really long shirt/coat thing that I’ve noticed a few people in Asia wearing – will they become a trend here? We happened upon a row of more designer-style stores that had great stuff. Chatachuk is fascinating in that there’s rows and rows of cheap, shoddy things but then you stumble across a store where everything costs hundreds of dollars US. You never quite know what a pricetag is going to read. 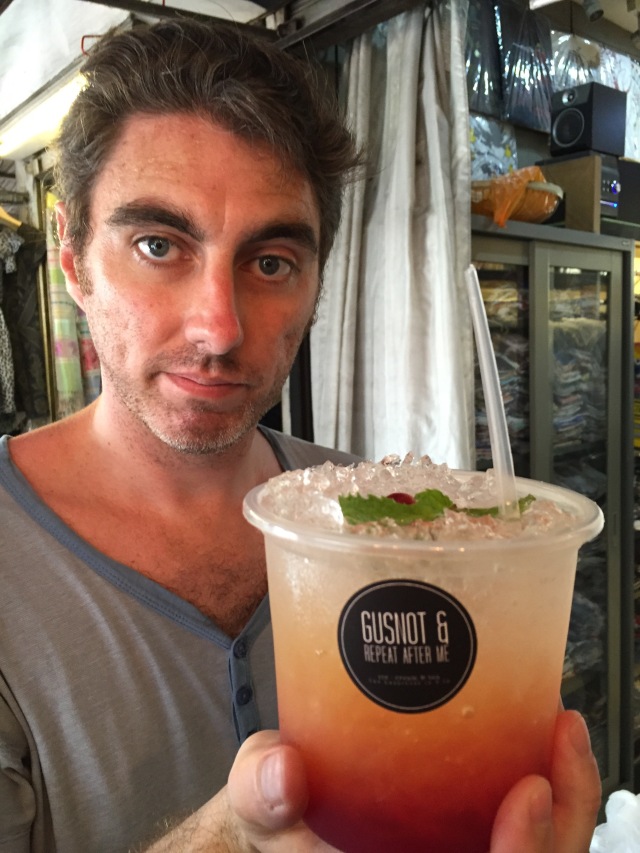 We headed back to the hotel in time for a swim and a shower before jumping in the transfer van for the ride to the airport. We had a three hour flight to Kuala Lumpur then eight hours back to Australia, through which I slept soundly. I felt pretty good by the time we got off the plane, although I did manage to leave my passport onboard and had to run back and get it. We had all got through customs at different times and so only Charmaine was waiting for us by the time Luke and I got out of the airport. It felt a bit strange not to say goodbye to Kupp, Lauren, Sledge and Toby, but we were talking the whole day on messenger, so it didn’t really matter.

I was certainly sad to have the journey end but I was happy to get home to Penny and give her lots of pats, and to get into my own soft bed and go to sleep (even if it was covered in dog hair). While we were away we discovered that Lauren and Luke were born one day apart so I demanded we start planning their 40th in seven year’s time. It’s good to have goals! 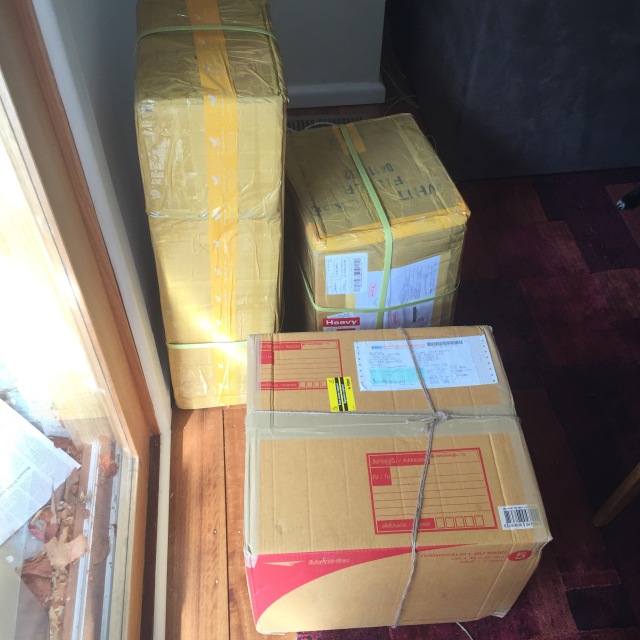 Unboxing my boxes and messing up the house! 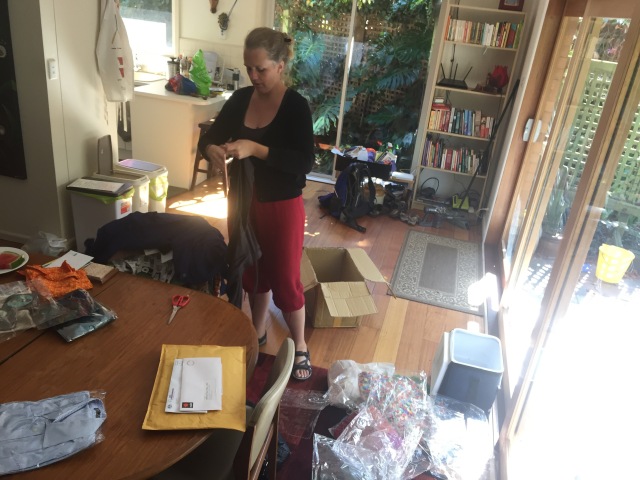