We met our travel group in the evening on our first day and, unsurprisingly, it turn out that they’re a lovely bunch of people and we have plenty in common. There’s only one other mother-daughter combo on the trip and, as seems to happen with startling regularity, it turns out we’re closely connected. Both mother and daughter (Lorraine and Bron) were students at the school where I teach. Lorraine was a student there in 1936!

The dinner was excellent and our tour guide, Carmen, was very genial and spoke in a loud voice and encouraged everyone to ‘smile and be on time’. Words to live by. We went around the group (34 people in all) and introduced ourselves. I told everyone that Mum brought me because I am her favourite child, which got a laugh. Nearly everyone is Australian, although there are a few Brits as well. After only one day it all feels very comfortable and everyone is happy to chat. I’ve even picked up some tips on pruning raspberries from one of the men – I can’t imagine that sort of information gets passed around on contiki tours. Their loss!

The breakfast buffet the next morning was excellent and Mum and I were one of the first tables seated. We probably ate too much, but lunch and dinner weren’t provided. I contemplated putting a danish in my pocket but decided against it, which was wise. We’d already swiped a couple of apples from the pool area anyhow.

Our bus tour of Vancouver started at 9am and not one person was late for the bus, which gave me a warm feeling inside. First stop was Stanley Park, a promontory of land that is mostly woodland. We looked at totem poles, which I would’ve appreciated more if I’d known anything at all amount them, and took photos of the city skyline across the water. The park was almost choked with blackberries, raspberries and ivy – it seemed surprising but maybe they are native plants here? We also saw black squirrels darting about the place.

One thing we noticed about the city was how very green it all was. Well-established trees everywhere and beautiful flower baskets and beds, and yet also heaps of rubbish on the streets and in some parks. The buildings were very similar to many in Melbourne and if it wasn’t for the mountains in the distance and the disturbing amount of homelessness, it could’ve been any Australian city.

We stopped at Granville Markets, which are a mixture of arts and crafts, and produce in a cute waterside enclave. Pictures probably tell it best. I still regret not buying some punnets of fruit, particularly since I’m typing this at 3am and my stomach is growling.

We also drove through China Town, the third largest in North America. Then through Gas Town, a kind of cutesy, touristy section with a gas-powered clock. Clocks are such stupid tourist attractions that I am constantly disappointed when I see people standing around, blocking the footpath, waiting for them to do whatever half-assed dinging they reliably do. At least they’re free, I suppose. 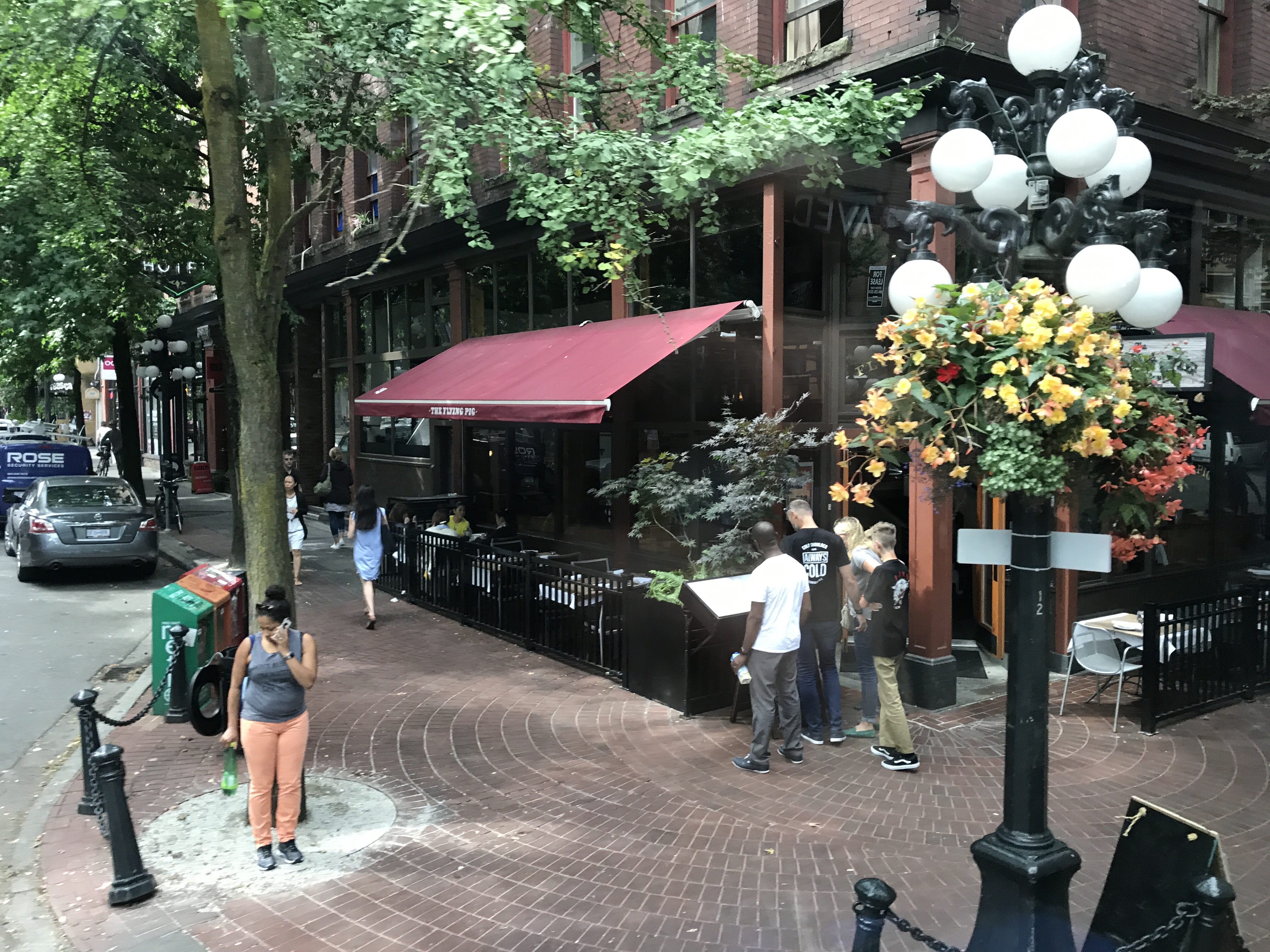 After the tour, Mum and I returned to the waterfront for lunch (salad and soup – it was a blessed relief to eat a single bowl of food) then walked back to the hotel via the world’s most chaotic second hand book store – and I know what I’m talking about here, I’ve been to a lot of second-hand book stores. This one looked like they’d filled up the shelves then just started hurling books through the door. After spending several minutes looking for the cashier’s desk I realised it was a pile of books with an EFTPOS Maxine perched on top. Still, the place had an outstanding sci fi collection and I bought three since my kindle doesn’t seem to want to download new purchases.

I took this photo right in the front of the store, further round it’s like a book-avalanche ( the best kind of avalanche, really).

I had a bit of a snooze in the afternoon, then a swim, then back out for dinner and then we went to bed at about 11pm. I woke up at 3:30am and have now spent 3 hours blogging. Please forgive all the typos I am too tired to notice!

Next: one of the tour highlights begins with the Rocky Mountaineer, one of the world’s greatest train journeys, or so I’ve been informed about twenty times in the last day and a half. We’ll see!

6 thoughts on “Canada and Alaska: Meeting the Group Plus Our First Excursion”