Despite reading on several blogs that the last (for most walkers) leg of the CW was dull, I quite enjoyed it, at least until the rain started towards the end. Perhaps it comes down to differences in temperament – I don’t mind walking along paved paths.

To be honest sometimes it’s a relief not to have to watch every step because of rocks, holes or mud. In fact I walked about 10 km before I stopped at the pleasant village of Dalston for a cup of tea and a packet of Compeed blister plasters (thanks for the tip, Mike, they fixed the problem immediately – thinking of bulk-buying to take home).

I’d certainly recommend their cafe as a friendly spot, I think everyone inside asked me where I was from and where I was going. 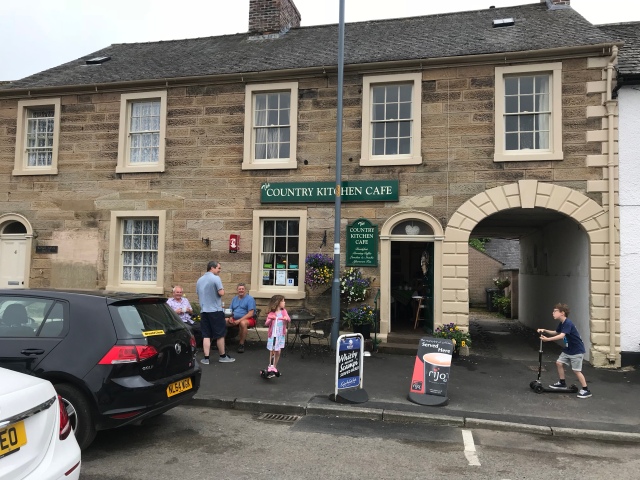 After filling up with tea and looking longingly at the cake selection, I headed off.

The route was strewn with wild flowers and delighted the eye. 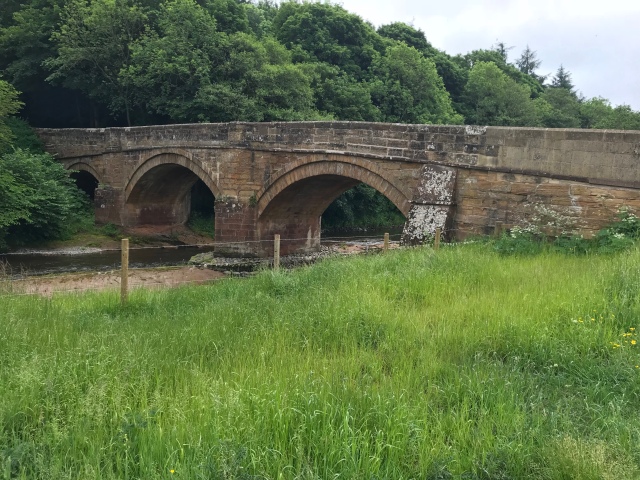 From Carlisle to Dalston the Way was reasonably well-signposted, but from Dalston to Caldbeck there were hardly any signs and the signs there were left something to be desired. 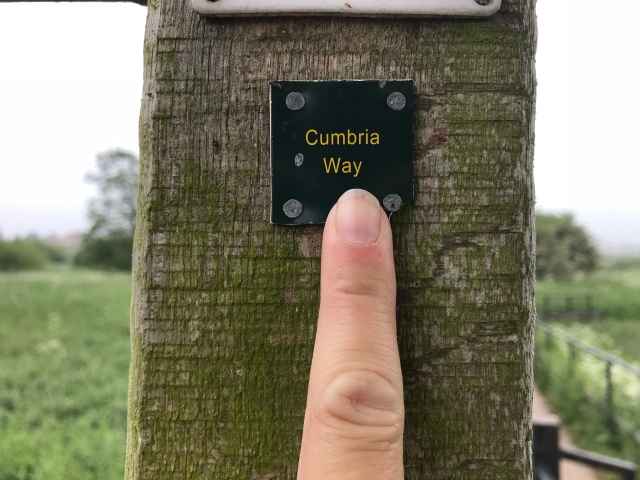 Size, for one thing.

With the help of a few locals I managed to find the way and had a particularly nice chat with one fellow who was walking his dog. We talked about Belfast (everyone I meet wants to know what Belfast is like these days – it’s literally an hour away and costs under $100 to fly return but why go there when you can go to the Costa del Sol every year for the rest of your life, for crying out loud…ahem) and we talked about his dog, who was one year old and the love of his life. I mean this in the nicest possible way. This man gave up cycling because he got this dog and wants to do everything with it. He told me he’d always wanted to go to Ireland but he’d only go now if he could take the dog. It was endearing and reflected the complete devotion to dogs I have witnessed all over Cumbria. I don’t know whether dog lovers just like to congregate here, but I don’t recall ever seeing dogs anywhere elsewhere in these numbers.

Anyhoo, I was on such a roll with my unaccustomedly speedy walking, I forgot to have lunch, and so of course it was at the point when my stomach started to rumble that it started to rain. I had planned to camp in Caldbeck, as it has several camping sites, but once my raincoat had been defeated and soaked through by the downpour I decided I would happily pay anything under a hundred pounds to have a dry bed for the evening.

Fortunately the Oddfellow Arms in Caldbeck had rooms for £40 a night.

They were nothing fancy but the bed was the best I’ve slept in yet, out of all the pubs and B&Bs so far, since it was neither trying to swallow me whole nor herald every movement I made with loudly creaking springs or headboard. I can’t say that the staff were overly friendly or the food particularly gourmet, but it certainly did what was necessary.

I watched a comedy gala on tv and drifted to sleep listening to the dulcet tones of the staff gossiping and smoking cigarettes under my bedroom window.

The vegetarian breakfast wasn’t bad at all and set me up well for my half hour of wandering around Caldbeck looking for any indication at all that the CW passed through. I’d left my map that covered the area back at Andrew’s in Cambridge and had so far struggled through and, since I could see High Pike, my first peak of the day, from the village I thought I could work it out without help. Eventually I had to google it and found a road that headed in the right direction. The actual route will remain a mystery.

As happens every day in which I walk with my pack, the first three or so kilometres were a dreadful struggle. Nothing sits right, my hamstrings are tight, my thoughts morose. Eventually a lovely view appears, a downhill stretch is reached, and everything becomes better. 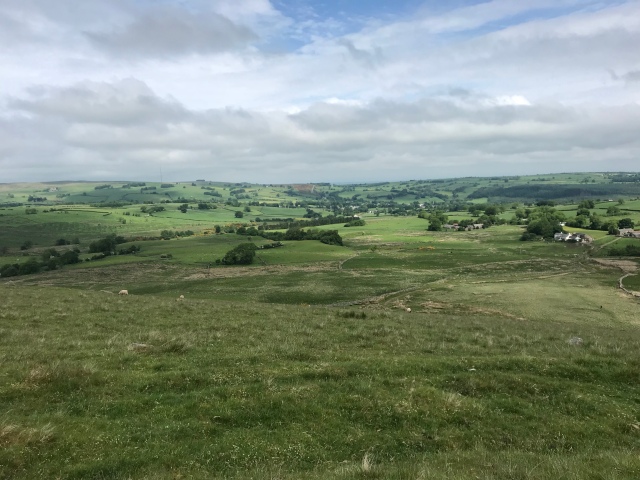 I took my time getting up High Pike, admiring the view back over farmland, and eventually reached the top where a group of energetic young people were having similar worries to me regarding the dark clouds that were gathering over the peaks.

The top of High Pike has a cairn, great views and a lot of sheep. I’d set off late from Caldbeck (10:30) but with thoughts about wild camping I could take time, and so when I spied another peak off to the east that looked like an easy walk, I decided to go have a look.

This turned out to be Carrick Fell, which a very enthusiastic lady informed me was a Wainwright, so along with High Pike I know I’ve now climbed at least two of the 214 summits he recognised. I suppose it’s some kind of accomplishment to spend a whole month walking in Cumbria and climb so few.

Back along the Cumbria Way I had an easy walk along a bridle way for a few kilometres. I sat with a German couple for a bit and ate one of their biscuits while we discussed the route. They neglected to mention the godawful bog that awaited me around the next corner, but I supposed I shouldn’t complain as I didn’t even come close to losing a shoe and it only went on for about 500 metres.

The last challenge of the day was the descent into the valley, which had looked worrying on the map but wasn’t too bad. 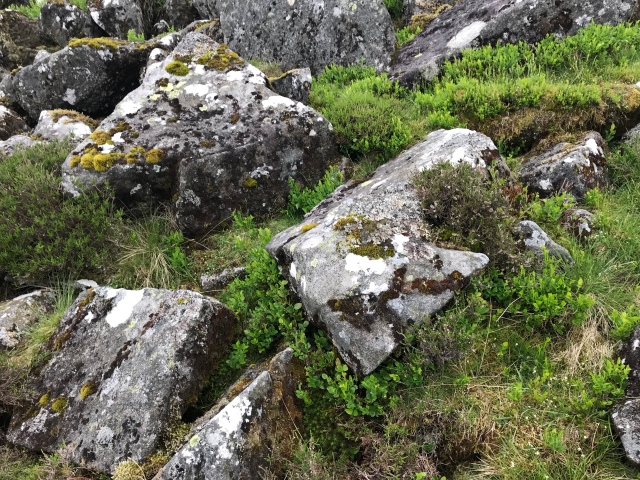 The way down was mostly made of these boulders with fantastic colours of lichen, from black to white and many shade of grey and green in between.

I had hoped to have my first night of wild camping and as I walked along the valley floor I kept an eye out for suitable spots. Eventually I saw some other people camping by the river and felt emboldened in my plan. I walked a little further on until I found a ruined shepherd’s hut and sheep pen with a lovely flat mossy patch beside it. I pitched my tent and felt very satisfied!

I, rather appropriately, finished reading Great Expectations, made a gourmet dinner (picture below), and went to sleep, only waking for a short while around midnight to very loud thunder and bright lightning but little rain.

The next morning I headed on, stopping to enjoy yet another gourmet meal near Skiddaw House.

Skiddaw House is touted as being the UK’s highest and most remote YHA. I’ve never read Wuthering Heights, but the wind-blasted pines and heath-covered moor made me think it must surely be reminiscent of the book.

A relatively short way from Skiddaw House and at the end of a deep and wide valley I finally came to the gate at which I’d stopped my south to north journey and which marked the completion of my first long distance walk. Hooray! This is me looking thrilled by myself on a mountain-side.

From there it was a shortish walk down into Keswick. I wanted to tell someone – anyone – what I’d done and I passed so many people who were on their way up (it was only 10am when I finished) but I held myself back and resorted to showing off on instagram, where everyone dutifully told me I’d done a good job and were probably secretly glad to know that there was only one more blog post and maybe 50 or so photos on Facebook before they’d never have to hear of the Cumbria Way again. 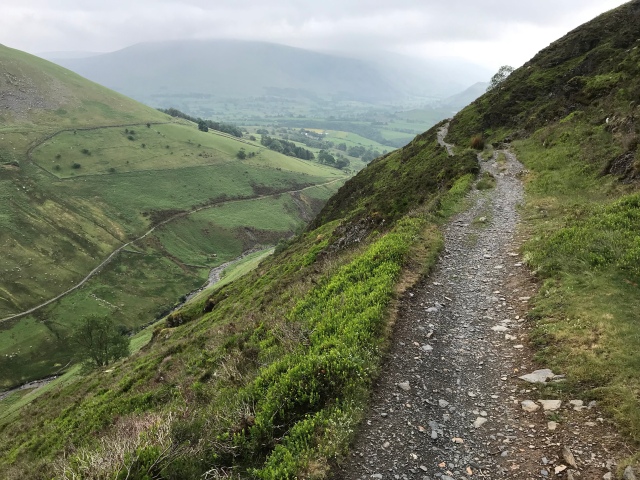 13 thoughts on “Carlisle to Keswick: The Cumbria Way”