My second cousin Angela and her husband Rick had invited me to visit them on my travels and after all my changes of plans and moving around I realised that time was running out if I was going to make it before Luke arrived and we were off to Croatia, so I booked a bus from London to Manchester and off I went.

The trip on the bus was a bit of an experience in itself. The bus station in London was quite big and arranged so that everyone crowded into too-small waiting areas (obviously I was there super early so I got a seat) and then all the buses left every half hour. All the buses were filled simultaneously then the doors to all the waiting rooms were locked and then the buses left in a big group. It seemed like a very good way of avoiding having people dashing between moving buses but it also meant a traffic jam on the way out. 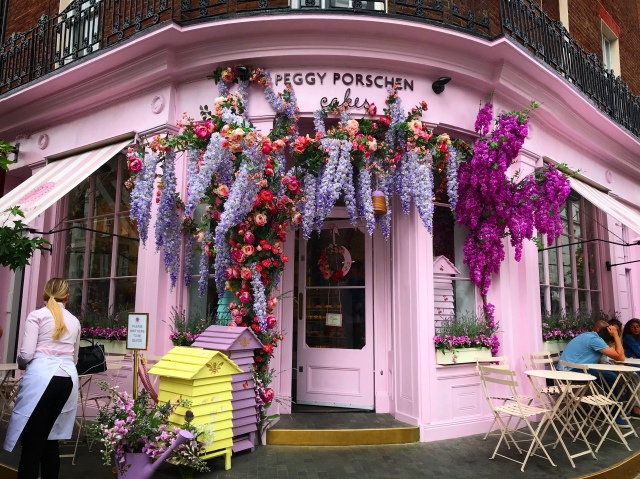 Before getting on the bus I saw the Peggy Porschen bakery and I tried to have a snack there but the service was so slow I had to leave.

I was sitting in the second row and enjoyed listening to the bus driver, who had an almost impenetrable northern accent, talk to a lady in the front row who obviously took buses all over the country and only had one arm. They chatted non stop the whole way and by the end they were both making jokes about her having one arm and she was sharing some cakes she’d made with him. They were both very funny and the lady next to me kept chuckling to herself as we listen to their banter.

Upon getting to Manchester I had to change to a train, which meant a short walk across town and then I accidentally got on the wrong train as there were two trains on one platform. Luckily I’m the sort of person who doesn’t mind asking people if I’m doing the right thing and jumped off the wrong one just in time.

Soon I was in Macclesfield, a picturesque town in the Cheshire Hills, where Angela and Rick were already waiting in the car park. Seeing family always lifts the spirits and Angela and Rick looked exactly as they did when Mum and I saw them five years ago.

As this was just a quick overnight visit we didn’t have time to do much but I was perfectly happy to just sit and chat and catch up on family news. Angela had recently had a cochlea implant and was getting used to hearing again. It was interesting to learn that music didn’t translate properly through the device and that it was still important for Angela to use lipreading to understand people.

Rick had retired from his work as a minister for the Church of Scotland but had since been ordained as a minister in the Church of England and continues to do bits and pieces locally. I can well imagine that being a minister is not a job that finishes abruptly when a decision is made to retire. Angela and Rick moved around quite a bit for Rick’s job but are now living in their own house.

Kettleshulme is a small village in a beautiful area that seemed quite similar to the Lake District. We went for a drive on the way to the train station in the morning and I could easily imagine doing a lot of walking in the area – out of hay fever season. As we drove around everything still looked very green but the lack of rain this year has had a dramatic effect on the local reservoirs, which were lower than ever before.

I also got to meet Angela and Rick’s dog, Teal. A friendly spaniel who wanted to sit on my lap and sniff my face as often as I would let him.

His expression would alternate between desperation and annoyance. 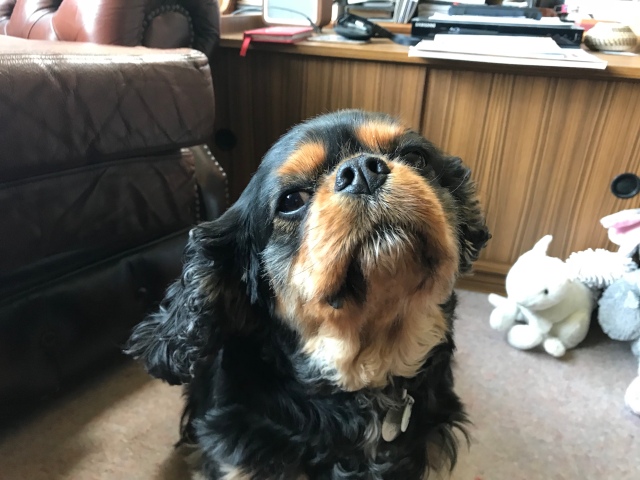 As soon as I arrived I wished I’d made more time to spend with them, and being able to sit with family and enjoy beautiful home-cooked food and properly relax after dashing about in London was a real pleasure. If you’re reading this, Angela and Rick, thank you for a lovely visit, it was just what I needed and it was so good to catch up!