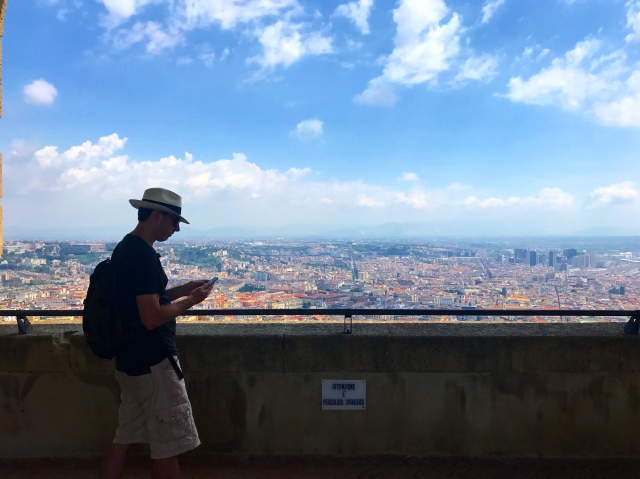 Round three of pizza this morning. Our first stop was Di Matteo’s, which was less than a kilometre from our accommodation. We got there so early that it hadn’t actually opened so we stopped at a cafe for a rather expensive cappuccino (Luke) and lemon granita (me). 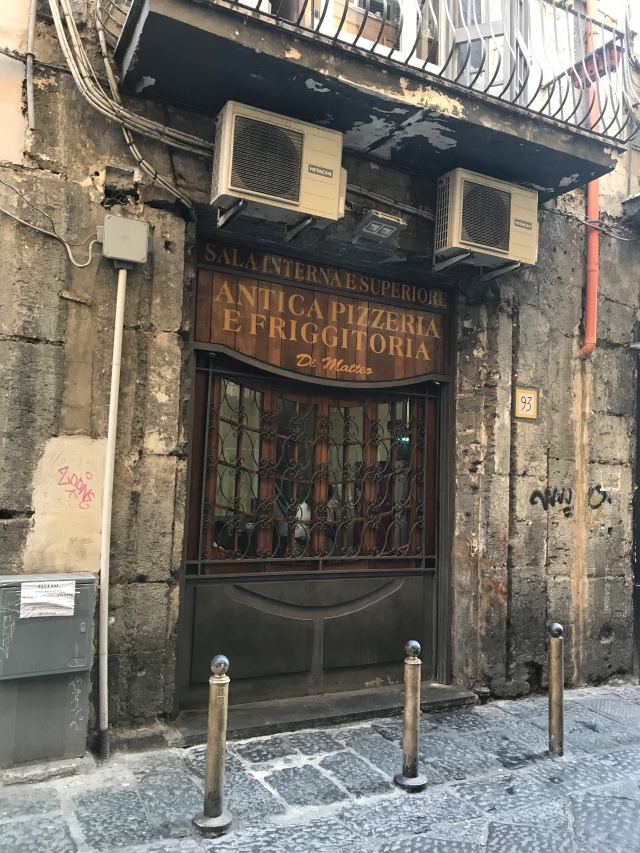 I absolutely hate queuing for things and so I like to arrive, if at all possible, when an attraction or restaurant opens. We keep watching docos or seeing pictures of pizza places here that are swamped with people but so far we haven’t had to wait for a thing.

Di Matteo only have a serving window so we bought one Margherita then walked down the road to a church and sat on the steps. When they hand you the pizza here it is in a sheet of paper and they fold the pizza in half then quarters to make it easier to take away. It cost all of €1.50.

We took photos and video before we ate, which isn’t as annoying as it sounds because it takes a couple of minutes for the pizza to cool down to eating temperature. I had brought along my trusty scissors and cut the pizza in half. Luke thought it would drip everywhere but using scissors worked well and I’ve been glad to have them on me.

We both liked the pizza a lot – Di Matteo has an excellent reputation. The sauce was piquant and the crust had a good texture and char but I think I prefer my pizza served flat. Folding means the topping and crust get squished. Plus serving on paper means the oil does inevitably start to drip and you have to watch out or it gets on your clothes.

After the pizza we took the funicular up to the Castel san Elmo and admired the view. There’s not actually a whole lot to do there apart from a small modern art gallery in the centre but the view from the ramparts is 360 degrees and positively stunning.

Tonight we’re going to another restaurant so I look forward to eating my pizza on a plate and maybe having another Aperol Spritz. I think it is a drink that will now always remind me of Italy, much as peach iced tea now reminds me of Turkey.