It seems that the older we get, the more our holidays revolve around food – much to our waistlines’ detriment! After two fantastic Michelin-listed restaurants in Alsace we decided to use one of our days in Cheltenham to book lunch at Le Champignon Sauvage, a two starred restaurant since 2008. The head chef is David Everitt-Matthias, who has released several cookbooks, although I hadn’t heard of him or the books until we looked up the restaurant. 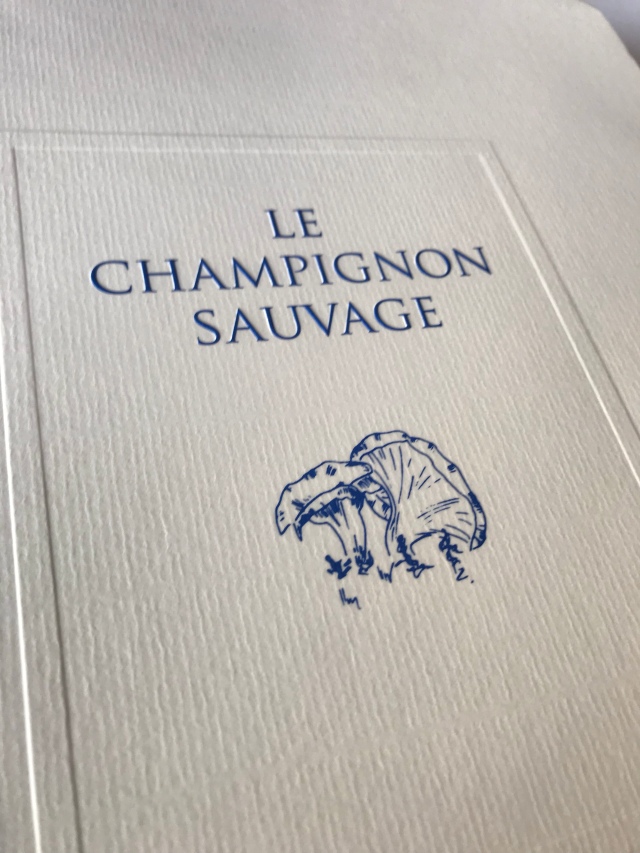 We walked across town from our glamorous Holiday Inn accommodation and I changed out of my grotty trainers into my heels just around the corner from the restaurant. I’d bought a new handbag to hide them in and Luke had had a haircut and shave that morning – we were looking our best! I only wish I’d asked them to take a photo of us out of our normal jeans and T-shirt ensembles.

As is my habit, I misread the time and we arrived half an hour early, so we had a drink in the pub just down the road and relaxed before arriving at the restaurant right on 12:30.

The restaurant is quite understated but very comfortable.

Double-covered tables, good spacing and comfortable chairs. The staff were very welcoming and I was very happy to be seated near a bright window so I could be one of those awful people who take photos of every course.

The menu had several options but we chose three courses from the £35 set menu. 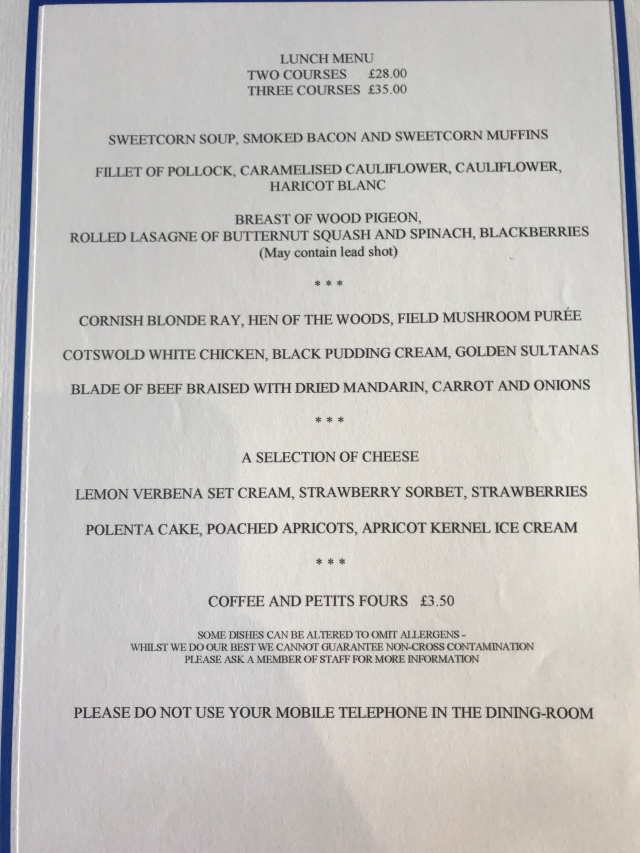 Before we had ordered we were brought a small plate of savory bites that looked like truffles and biscuits. 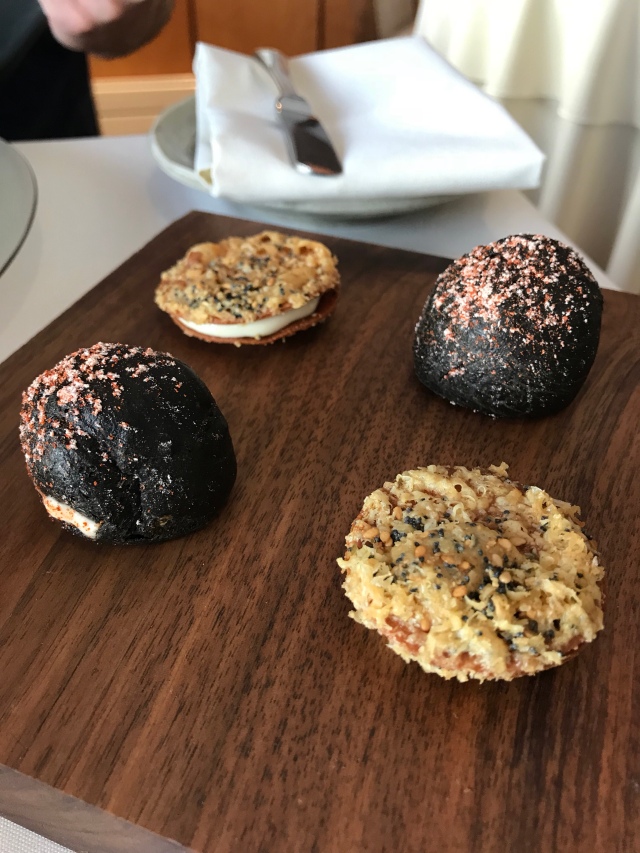 We have our order taken and then were presented with a warm celery amuse-bouche.

Delicious! I have never had a celery soup and would never think to order one but this was creamy and refreshing. It also had a pretty mix of spices floating on top, including rose petals, I think.

We both decided to start with the breast of wood pigeon (warning – may contain lead shot).

Neither of us had tried pigeon before and both thought it was delicious. The whole flavour effect reminded me of an autumn forest (if I can dare to be so pretentious about it). Nutty granola, sweet blackberry and mango, green flavour of saxifrage and earthy pigeon with a hint of Christmas in the vegetables and chutney. Possibly my favourite course as it was so evocative! We shared a half bottle of a fairly heavy red that was exceptionally plummy and matched well.

Next up, I chose the Cornish ray (like sole) and Luke chose the beef blade. I had quite a bit of food envy as his dish looked incredible and tasted great. Mine was less powerful but the mushroom flavours were lovely and very well matched by the wine. I’d asked the waitress to choose a wine pairing and it was a Brescou viognier that reminded me strongly of the very unusual white we’d had with our mushroom dish at l’Agneau.

With the savory courses we had a choice of bread. Luke once again made a great choice with a brioche, while I chose a white roll that had an outer consistency of rock and shattered everywhere as I hacked into it. When I was given a second choice I went for the onion brioche. It was the lightest, crispiest bread roll I’ve ever had! 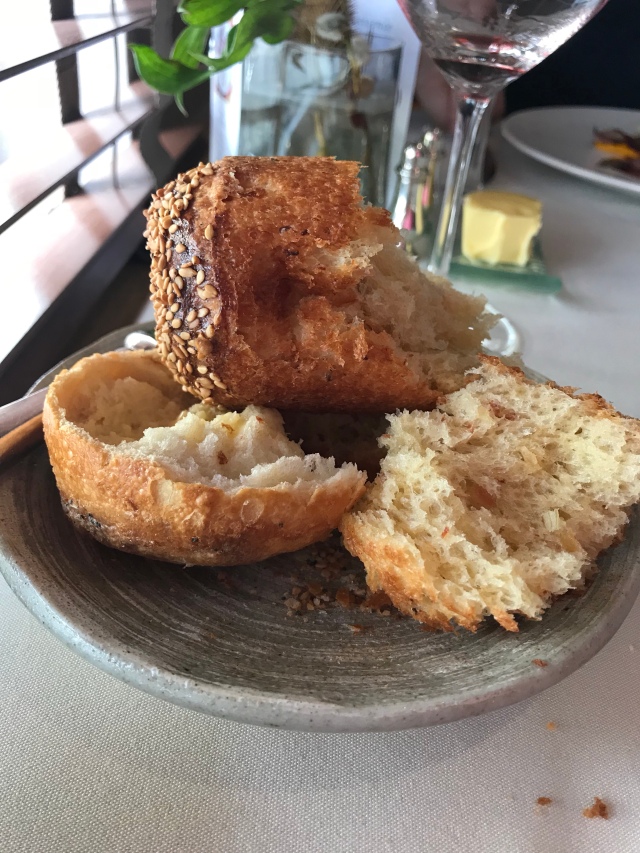 I didn’t need to eat two bread rolls with three courses but I did anyway. 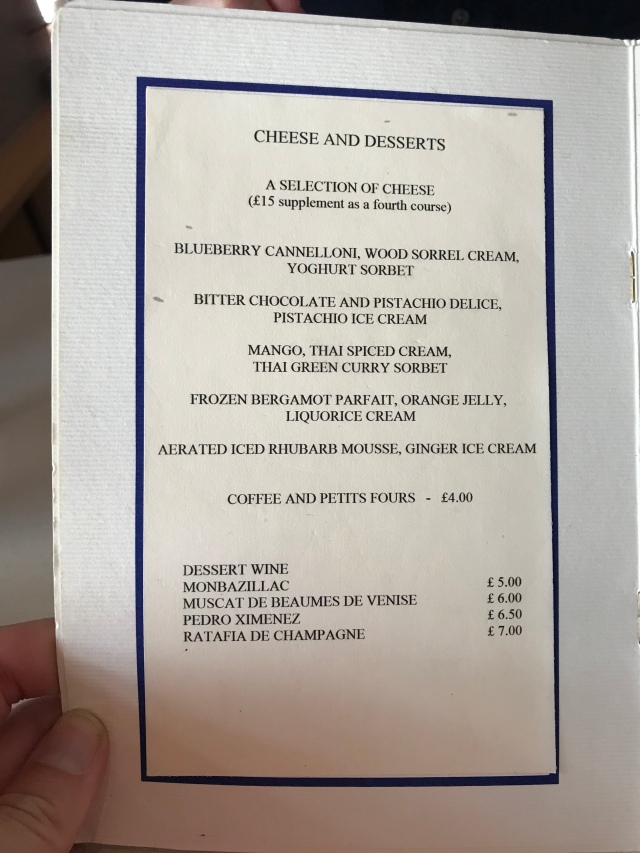 We both chose the lemon verbena and strawberry sorbet. I grow lemon verbena in my garden and have clearly not been using it to its full potential. 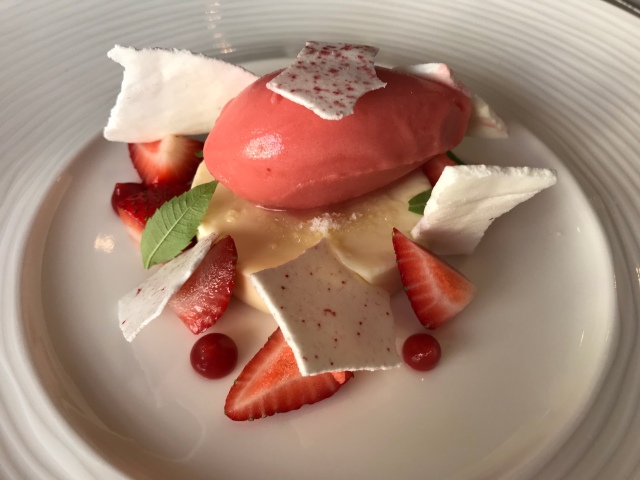 Gorgeous! The strawberry sorbet was the prime flavour but the verbena was a delightful citrus note. The combination of textures was a pleasure to experience.

We decided to have a fortified wine with our dessert. I chose the champagne ratafia because the characters in Georgette Heyer books are always drinking it and I’ve never tried it. Luke chose the Pedro Ximenez and once again he made the best choice because it was quite the richest liquor I’ve ever tasted – and we’ve tried quite a few. My ratafia was also lovely with burnt toffee and raisin flavours. 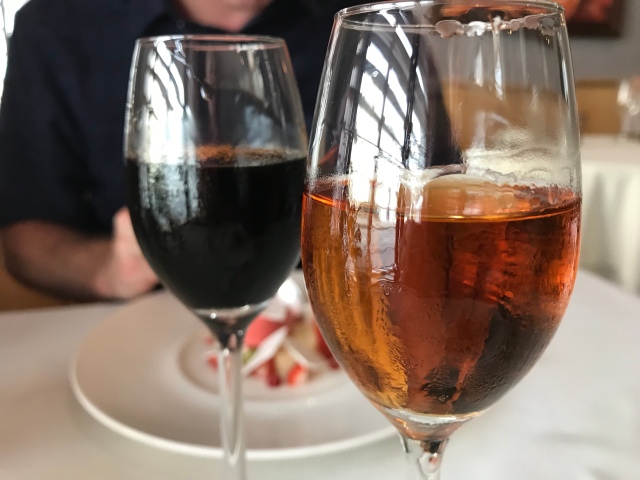 I’d had quite enough by that stage but Luke had a coffee to finish and it came with petit fours.

We left a bit after 3 and I was full to bursting. Even though fancy restaurants do serve small quantities, there are lots of little extras that fill you up. The bill came to £132.60, which is about $260 AUD. It was almost twice as much as our lunches in Alsace and about $200 more than we’d spend on a pub lunch but well worth it for the experience.