Jess, Luke and I were spending two nights in Harrogate, a city none of us knew anything about, in order to visit the Harrogate show.

A year or two ago I started following a blogger who is a very successful allotment gardener and who made videos and talked a lot about entering his vegetables into shows. He regularly grew enormous carrots, onions and a variety of other things and I became entranced with it all and decided to go see it for myself.

Unfortunately for Luke it meant spending his 36th birthday weekend watching me looking at vegetables but it was a price I was willing for him to pay. I booked the tickets a few weeks prior and a nice Airbnb apartment right in the middle of Harrogate.

The apartment turned out to be absolutely wonderful – probably one of the best we’ve ever stayed in. It was on the third storey and had panoramic views over the town centre.

Jess researched somewhere to eat on our first day and settled on Betty’s, a restaurant that is quite famous locally. We were shown to a downstairs room that was paneled with gorgeous marquetry artworks showing scenes of Yorkshire and Alsace. It turned out the food was a mix of Swiss and English, which made the whole experience rather interesting for us as we’d just visited Switzerland and Alsace before coming back to England.

All the work was done by an Alsatian artist named Spindler. 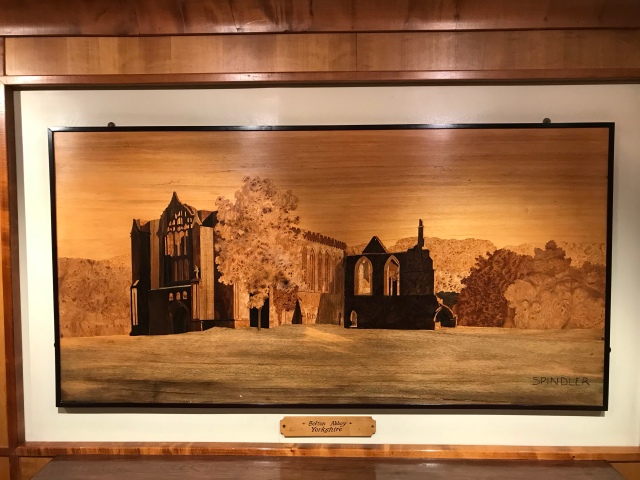 Jess has an afternoon tea and we had macaroni and cheese. Perfect! 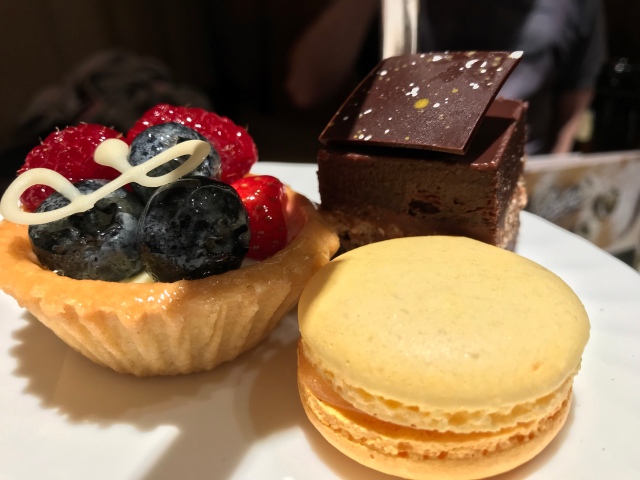 A very nice start to our stay in Harrogate and we were all immediately taken with the town, which had a very prosperous and Victorian air.

The following day we headed to the Autumn show on the shuttle bus, arriving just after the gates opened. I had no idea how busy the day would be but at the time we arrived there was almost no one there, which made it much easier to take photos of the exhibits. By the time we left it had filled up quite a bit but I imagine there were still tickets available on the gate.

First stop was the flower hall.

The majority of flowers on display were chrysanthemums, dahlias, gladioli and roses, with a few lilies and fuchsias. The dahlias were my favourite. 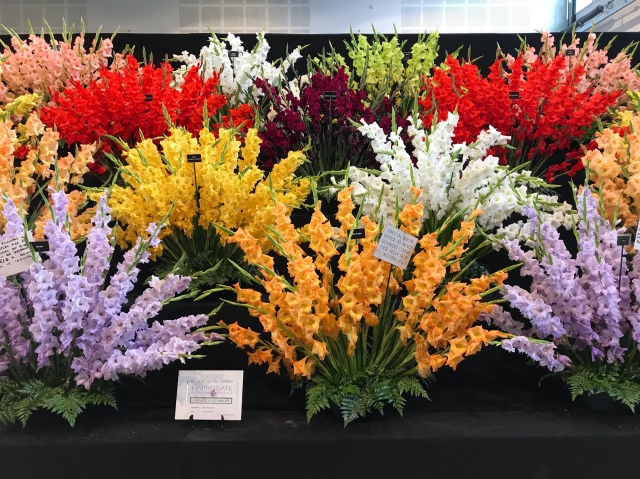 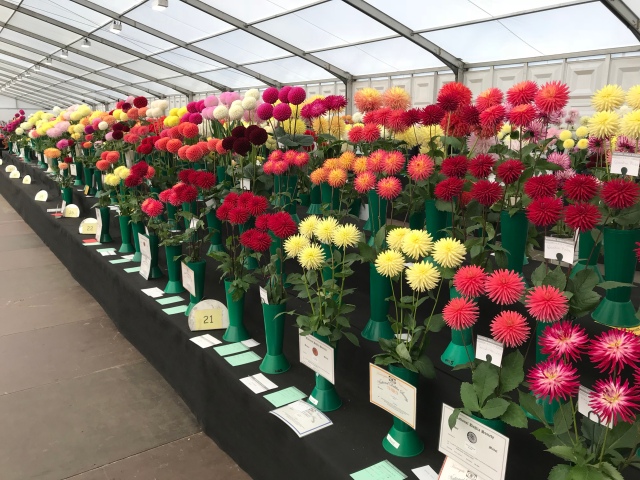 Then it was on to the vegetables and fruit.

There are two main kinds of vegetable competition. One is for perfect sets of vegetables, as with the groups of onions above and the tomatoes and leeks below. Often size is a factor as well – the largest matching set is best. 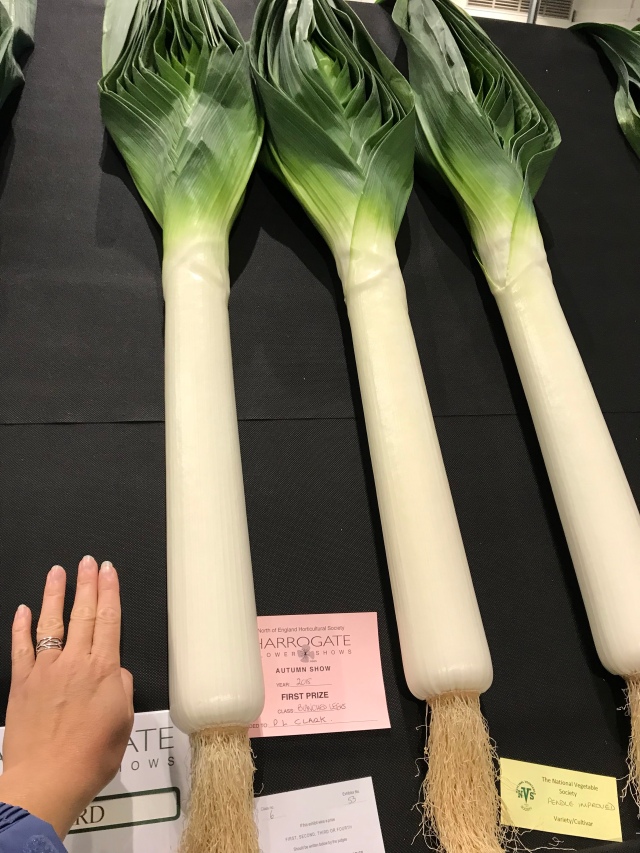 The second main category is for the largest vegetables. These are often extremely ugly.

This man grew a pumpkin that weighed over 300kg and said he had a bigger one on the vine at home! I had thought large vegetables were often tasteless but he said this one was good to eat and would go to soup kitchens etc.

Heirloom apple and pear varieties were on display and they often had amusing names. 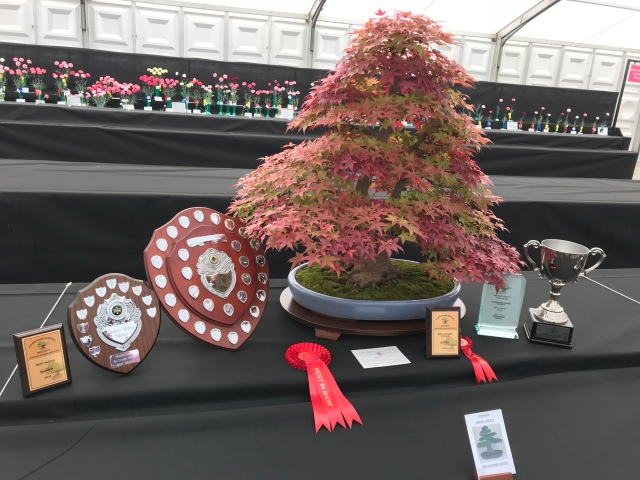 There was also a number of bonsai competitions and people selling them. This one was best in show. It must be hard being a bonsai competitor knowing that something like this was going to keep being entered every year. At least the vegetable gardeners get a fresh start each time.

Apart from produce there were marquees of crafts for sale and lots of food, from fudge to pork pies. We bought a few things but I looked longingly at much more! There were also lots of people selling garden furniture, pizza ovens, patios, sculptures and lots of food available on site. 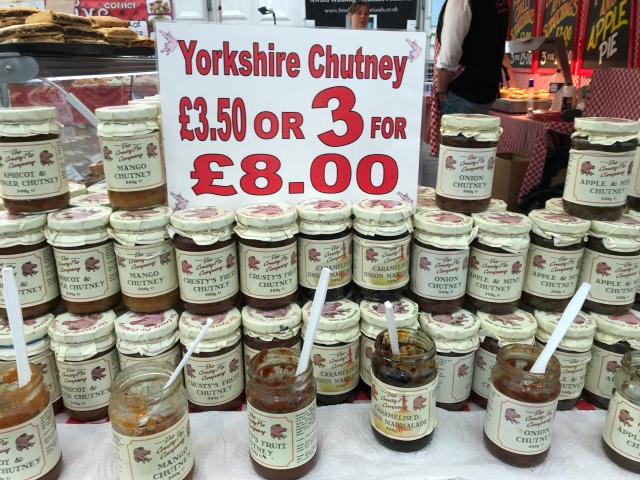 We spent about half a day wandering around and enjoyed it a lot. An event not many tourists would go and see perhaps, but we all had a good time and I’d recommend it to anyone with an interest in that sort of thing.

Next: The Yorkshire Sculpture Park.