After a barely-sufficient quantity of sleep on my flight I caught the Tube into London, avoiding the £25 for the Heathrow Express which is crazy expensive. I marveled to watch the extraordinary number of people reading actual newspapers, which I never see in Melbourne, where everyone uses their phones on PT, which I think is probably better, since less elbow room is required.

London had put on a drizzly day but I was grateful for any weather that wasn’t sleet and I renewed my acquaintance with the intricacies of the tube map and the fact that I felt either too hot or too cold every ten minutes, depending on whether I was above ground or below it. Frequent changes of layers aren’t much fun when you’re hauling a huge backpack and I was already looking forward to being outdoors and walking miles rather than being crowded in busy carriages and feeling like I was in everyone’s way.

I went straight to the place I was staying, the Exmouth Arms pub, which is three blocks from Euston Station and was just about the cheapest place I could find at $65 AUD a night. The downstairs was quite a cute little pub and the upstairs was basic hostel accommodation. The reviews on TripAdvisor were mixed but I thought it was perfectly fine and decent value for money. Of course all hostel accommodation is made more bearable with earplugs, and eye mask and a sedative if you can lay hands on some.

I decided to check out some London sights I’d missed on my previous dozen visits. First I headed to Borough Markets for some food.

You’ll be astonished and impressed to learn that I didn’t buy any beef dripping chips (but I will when luke comes over) and opted instead for some welsh Caerphilly cheese, a bag of super juicy cherry tomatoes and some sourdough that looked great but ended up reminding me of Terry Pratchett’s description of dwarven battle bread. I tried to tear it apart with my bare hands and nearly tore a nail clean off.

I gave my jaws a good work out on the crusts of the rolls while strolling along the Thames towards St Paul’s, listening to the soothing sounds of Spanish tour guides shouting at groups of tourists on bicycles as they whizzed past.

The rain mostly held off and I made it to the cathedral, only to find the entry price a bit steep, especially considering I’d already spent twice my daily budget thanks to the acquisition of a new SIM card with lots of data and and Oyster card that I almost need to top up again already. How much is my daily budget, I hear you ask? I’m aiming for $100 and hoping it evens out with some cheap camping days over the next few weeks. Although the barmaid at the pub tell me snow is predicted in the north shortly so we’ll see.

Here’s a very colourful and dynamic bit of street art. No prizes for recognising the subject. 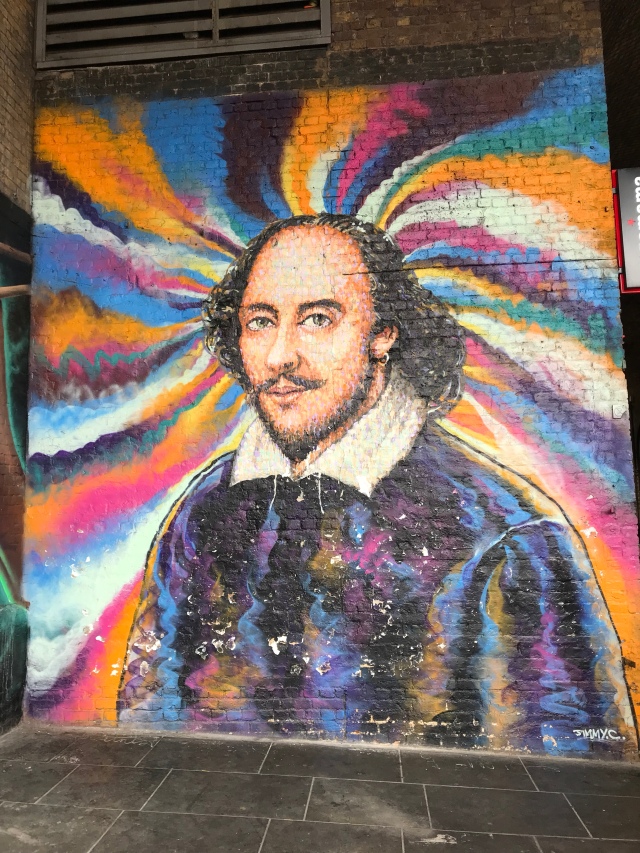 Next I decided to head to the Tate, which I remember enjoying about 17 years ago. As I walked there I contemplated travelling solo and how I felt I was paying much more attention to my surroundings than I would have if I was with someone else. I noticed many public sculptures, and about five thousand joggers dodging purposefully through the crowds. I know there are many runners in Melbourne but do we have more in the way of parks in which people can run? I know London is full of huge green spaces and yet people seem to want to do their running around places like cathedrals, which are thronged with crowds of people who walk slowly and unpredictably. Maybe it makes it more challenging? Who knows. 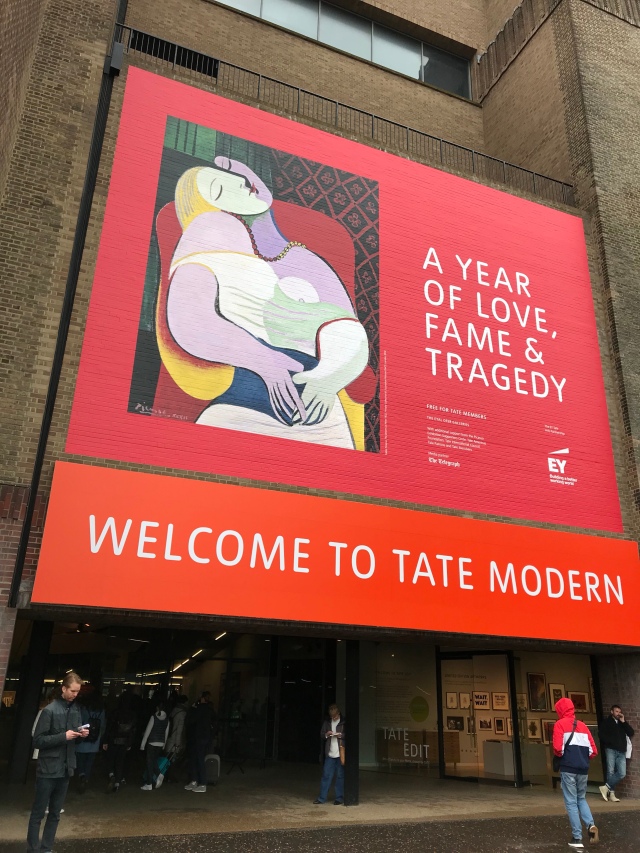 Anyhow, the Tate turned out to be the best stop yet. I didn’t actually look in many rooms because one of the first things I saw was a nook where little docos about artists were playing and they were so nicely done that I sat in there through every one and nearly fell asleep. I think if I’d taken advantage of the beanbags instead of sitting on the wooden bench I might have spent the night.

The artwork above was featured in one of the docos. I wouldn’t have given it a second thought if I hadn’t known the story. An Indian artist wove the rope from human hair – 4km in total. These ropes are often attached to bumpers of vehicles in India as good luck talisman. She used hair from people of all castes and background to symbolise her interest in the growing disunity of Indian culture. The contrast of the soft and organic hair with the shiny, industrial bumpers was also interesting.

I would like to go back with Luke and Jess when we have a bit of time in London as there is an outdoor section with swings built for two or three people and all the people I watched look like they were having a glorious time, despite the drizzle.

This artwork also caught my eye. There was a lot of Cold War symbolism mentioned in the blurb. Personally, I just like the idea of giant potatoes.

After my extensive period of sitting the jet lag really started to catch up with me so I had a mocha from Starbucks and then headed back to the pub to properly check in and relax. It being about 3pm, sleep wasn’t on the cards so I pulled myself together and walked to Regents Park. I’m glad I did because the tulips were glorious and it was nice to get out in a big, green, quiet space – also first squirrels spotted.

Last job of the day was a quick supermarket trip to buy a lighter for my jetboil and a couple of packets of two minute noodles then I headed back to the pub for a glass of wine and then bed. After a solid eleven hours sleep I now feel ready to tackle anything!

Next up: whatever happens on the train and my arrival in the northern market town of Ulverston!

8 thoughts on “London: I Nearly Fall Asleep In The Tate Modern”