Yesterday I caught the train from Euston to Lancaster, then a small local train from Lancaster to Ulverston. I have nothing much to say about the train from Euston, except that people who paint their fingernails in confined public spaces should be shot, and anyone who needs to pick up 12 napkins when they buy a bacon roll is what’s wrong with this planet (even though it could be said, I suppose, that paper napkins grow on trees). Either way, the napkin-purloiner also chewed with his mouth open and after an hour I couldn’t believe the people around him had allowed him to live.

Anyhow, idiots aside, the journey to Lancaster was uneventful. Not so the train to Ulverston! On a suspiciously crowded platform I was asked by a group of middle-aged men, all of whom were sporting large rucksacks, if I was doing the Cumbria Way. Yes, I replied, and it turned out they were too. We had a little chat and they explained they were meeting up with a couple from the Netherlands, whom they had met doing the Coast to Coast a few years earlier (I am telling you this because it becomes relevant later so don’t forget!). More people gathered and the single carriage train began to look increasingly problematic.

A driver arrived and we all squished on, I even managed to find a seat next to a little old lady. She looked astonishingly like my late grandmother, and since my grandmother actually lived not far from where we were, she even sounded distinctly like her. We had a good chat about her family and her late husband and my travels (you’re walking by yourself? My goodness!) . Amusingly, the whole vibe on the train was one of happy bonding through complaining (the previous two trains and the one after ours had been cancelled and apparently this wasn’t unusual) and I don’t think I’ve ever been in a carriage that sounded so much like a party. She waved me goodbye cheerily from the window when I got off and I felt quite warmed by the whole experience, even though it was only half and hour from start to finish.

I hefted my bag on my back and walked through Ulverston to find The Stan Laurel Inn, where I had booked a room for two nights. The pub was closed until six, so I went to another pub and had a sit and half a pint of cider while I waited.

When I returned to The Stan I was greeted by a group of men (not the same ones as before) who asked if I was doing a pub crawl. I’m sure I looked a trifle confused because they explained they they’d seen me at the other pub with my backpack and now I was here. I ended up having a drink with them and they told me they were in town to see their team, Chester, play. They tried to explain relegations and league tables to me but I told them to stop, please. Then we talked about my plans, why I should go to York, why they weren’t interested in Harry Potter, and online dating. Then they had to catch the train home so I sat at the bar, drank a glass of wine and chatted to the bar staff before heading to bed. 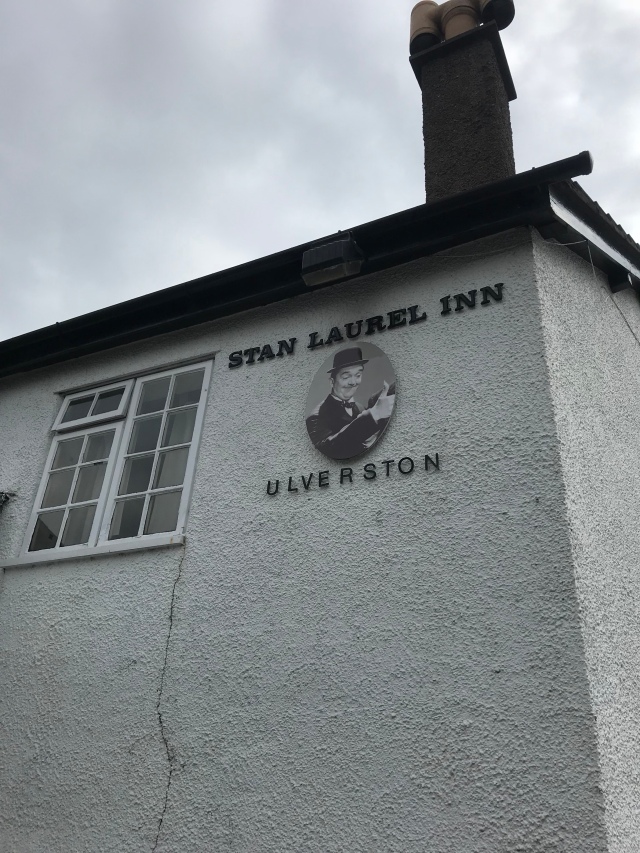 Now, I have been thinking about the ups and downs of travelling alone, and for me one of the downs is that I can go to bed whenever I want. For most people this would mean staying up late, but for me it means going to sleep at 8pm, which means waking at 4am. I amused myself with sorting out a bag of things I can live without for the next two weeks (I shall post them to Andrew in Cambridge) then decided to walk up a nearby hill to catch the sunrise.

Apart from the fact that I got up there half an hour early and realised that I needed nothing in my life more than windproof trousers, it was stunning.

The path wasn’t too steep and there were a few sheep about. I could see all the way to Sca Fell (highest mountain in England… I think) and various other mountains and landmarks.

For reasons unexplained, there seemed to be aplethora of benches along the path. Normally there’s never one when you want one, but in Ulverston there’s no shortage. Maybe this is where they are all made? I guess we’ll never know.

When I got back to the inn it was still two hours before breakfast so I looked at my map and tried to estimate how far I could walk tomorrow. I’ve given myself a feasible goal (wild camp by Beacon Tarn or stop at a campsite before then) or a stretch goal of getting to Coniston – or at least one of the campsites along the lake before the town.

At breakfast who should I meet but the couple from the Netherlands who formed the other part of the Cumbria Way party leaving today – remember those men on the station platform? Quite a coincidence! We had a good talk about walking (You’re walking by yourself? My goodness!) and appropriate clothing and not hurrying, especially up hills. They also told me to pick up sheep’s wool to put in any spots (shoes, shoulders etc) which felt like blisters were going to come up, a strategy I’d only heard before from my friend Robyn.

The rest of the day consisted of walking. Twice to the outdoor camping store to get waterproof trousers and gloves, then to get fuel for my jetboil as I had to go back to get it and make sure their canisters would attach. They only had the large size so I suppose I could make risotto every night if I want.

I also took a walk along the Ulverston canal, which was awful in multiple ways. First, it was dead straight and flat, second there was no view that wasn’t industrial estates or caravan parking, and last was the horrendous stench of cow manure that blighted at least half the 2km length. Fortunately the path ended at a bay and there was a delightful pub where I escaped the rain and had the biggest pot of tea I’d ever been served in a truly charming room. You can’t really tell from the photo, but the pot held at least five generous cups of tea and the milk jug was huge.

I genuinely feared for my bladder’s ability to cope on the walk back. But cope it did, and I spotted some swans nesting on my return journey and then spent the remainder of the afternoon reading a very jolly PG Wodehouse novel.

Have I mentioned that a walking festival began here the day I arrived? Well it did, and one event I had time to attend was a talk by one of the mountain rescue volunteers. Despite being excellent, in hindsight it probably wasn’t a great idea to hear a slew of horror stories about things that can go wrong the evening before I set out on my first adventure. Still, I learned a lot and am regretting not bringing a whistle or learning how to properly use a compass (I am mainly joking, my trail is one of the safest and lowest in the region and I’m told it’s well-signposted) but I have masses of waterproof and warm clothing along with waterproof maps so I’m sure I’ll survive.

the crowd at the talk were almost as funny and entertaining as the presenter, with one guy loudly saying ‘YOU’RE LATE’ to the six or so people who came in after it had started, much to everyone’s amusement. I got the feeling that most of the crowd knew each other and the presenter and asked him good questions while at the same time heckling him a bit. It was great! 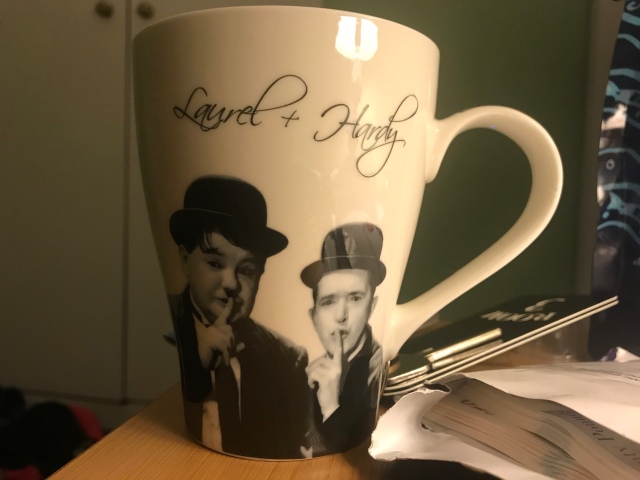 Oh yes, if you don’t know who Laurel and Hardy were, the names of the rooms in my pub would be quite confusing. 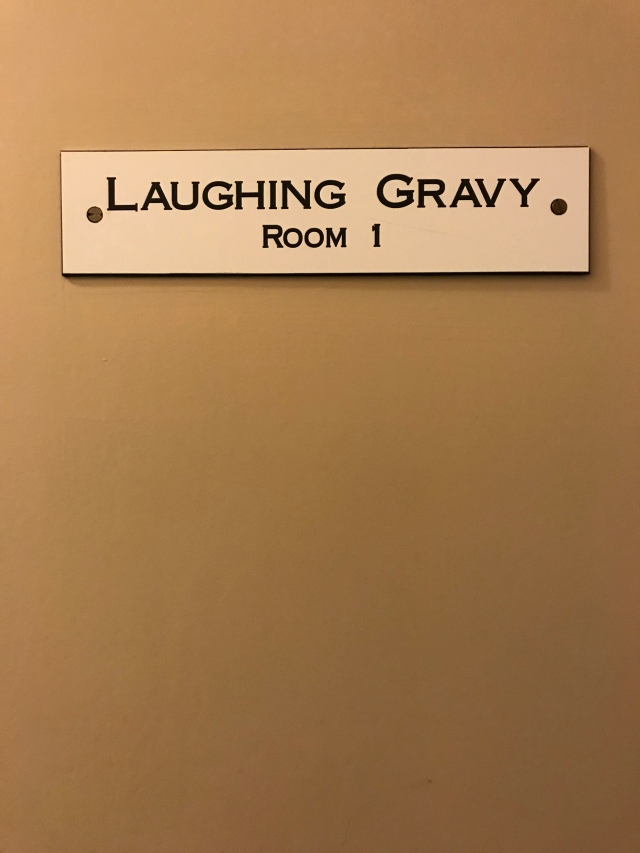 Stan Laurel was born in Ulverston and there’s quite a few things around town dedicated to him. It’s not often comedians get a mention so it’s yet another thing to like about this charming little town.

13 thoughts on “Ulverston: Preparing For The Walk, Drinking Too Much Tea And A Lively Train Carriage.”