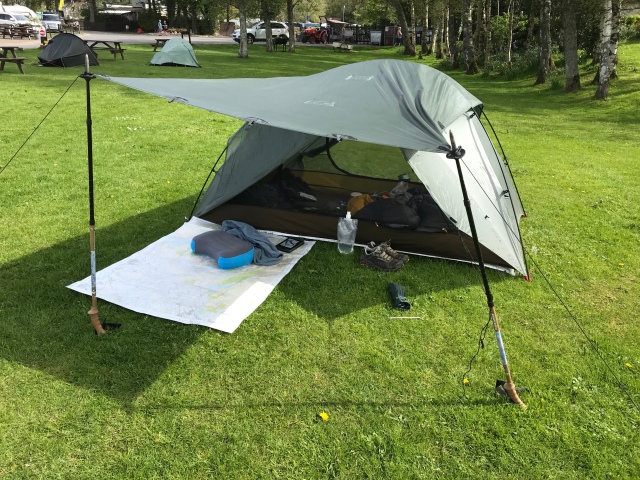 I’m now on my second full day in Keswick. I spent two nights at what has to be one of the world’s most lovely campsites and tonight I’ve moved to the YHA. Partly because of rain and partly because I’m sick of my blow up mattress and want a break.

The lakeside setting is stunning and despite being fairly full it was super quiet at night. The toilet and laundry block was almost brand new and every staff member was full of cheer. Of course the bright sunshine might have been a factor.

On my first morning I woke at the ungodly hour of 4 and got up at 4:30, as light was starting to tint the sky, and walked the 5km to Catbells.

If you, like I, have a dozen Lake District-related accounts on your Instagram feed, you’ll be very familiar with Catbells. Originally thought to have been ‘Cat Biels’ which means ‘cat’s hunting ground’, Catbells is a relatively small and accessible hill with a great view.

Unfortunately the path was mostly formed of loose gravel and steep enough that I didn’t feel like I would enjoy myself if I kept going up. So I stopped about a third of the way and watched the sunrise. It was lovely.

Although I felt a bit defeated from giving up on such a small climb, I saw many pheasants on my way home. I love them! I watched several harass a number of female pheasants in a paddock before the hens flew up on a fence and the males paraded up and down in front of them, looking miffed. If I had my DSLR with me you would be assaulted with dozens of photos of them so I supposed you can all be glad I only have my iPhone.

It turned out to be about 11kms round trip and it was 7:30 when I got back and I still had to hang around Booths for half an hour to get some breakfast. It’s amazing how far and how fast I can go when I’m not carrying my pack.

Aside from that I didn’t do much with my day apart from have a nap in my tent. In the afternoon I watched a man with his dog on the beach (rocks) of the lake clicking a dog clicker over and over while his dog seemed to ignore him. That’s super annoying, I thought. I wonder if his dog is blind?

So I went over to talk to him and it turned out that yes, his dog was blind. A little fox terrier that was 13 years old. We ended up talking for ages and he told me a terrific story about finding his extended family in Germany when he was young, almost entirely through chance. We also talked about dogs and travel and how nice it would be to actually live around here.

The next day I saw him in town and we sat on a bench and chatted some more and he bought us ice creams while I looked after his dog.

A lovely and relaxing day! Apologies for doubling up on some photos with Instagram, I’m not sure how many people will see both or if it’s annoying but I’ll keep doing it until someone complains.