This post, like the last one, is out of order – apologies again! I wrote it ages ago and then didn’t post it so here it is.

Every single person I had spoken to about The Cumbria Way and the last day of it towards Carlisle had spoken with no small amount of disparagement about the city – and quite a few of these people had lived there for a time. Therefore my expectations were about as low as could be when I finally arrived after a taxi, plane, bus, and then train journey from Belfast via Edinburgh. My plan was to walk back to Keswick over two or three days and finish my first proper long distance walk, having already done Ulverston to Keswick a few weeks ago.

I don’t know how anyone could arrive in Carlisle by train and not be at least slightly impressed by the way the castle turrets dominate the town (I didn’t take a photo sorry), not to mention that the station building itself is also quite lovely.

The pedestrian centre is a short walk west from the station and is a large open square. After the very helpful man in the pretty pink tourist information building gave me a printed list of bed and breakfasts and pointed out which were closest, I went for a wander in their general direction.

Being about lunch time, but still full from my big fry-up at Belfast City airport, I was looking for something light. I walked past a church hall that was operating as a cafe and went in to find that it was full of locals enjoying home-cooked food at bargain prices in an atmosphere not dissimilar from an inner city soup kitchen. 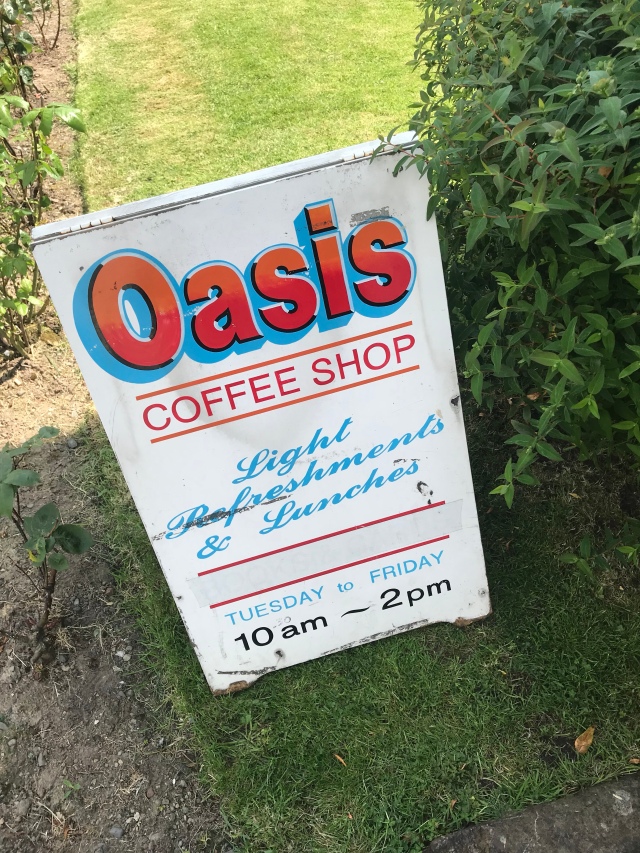 The soup was lovely and the cakes looked even better (the old man next to me had a huge slice of lemon meringue pie that looked to be the stuff dreams were made of) but I was determinedly Being Good. Especially after all the gourmet treats and potato bread in Ireland.

From there I found a room at a nearby B&B so I dropped off my bags and went for a walk around town. 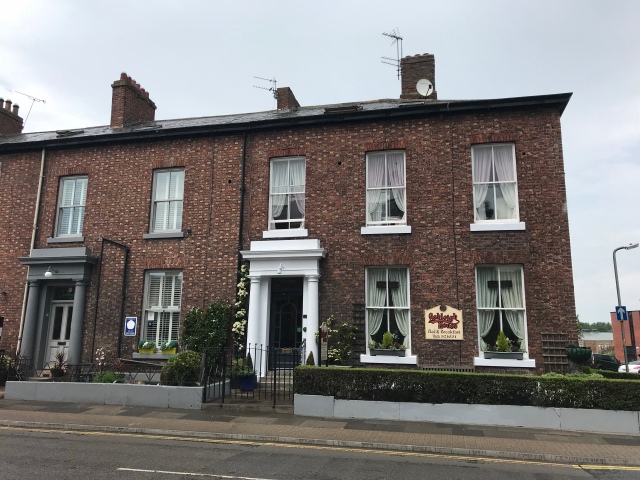 Unlike Belfast, which was bombed to bits during the world wars thanks to its huge docks, Carlisle got through relatively unscathed and has many buildings that reflect its history from Roman times onwards. It sits along Hadrian’s Wall and has a large museum that is partially devoted to it, with terrific hands-on stuff, like typical tents for legionaries and leather vest mail that the soldiers would’ve worn. The museum also creates an effective soundscape that really adds to such display.

Did you know that the Romans actually built two walls?

I was interested to learn about the reivers and pele towers, having read about them on other blogs.

The outside of the museum mimics the shape of the round castle towers near the station.

View from the museum across to the castle. 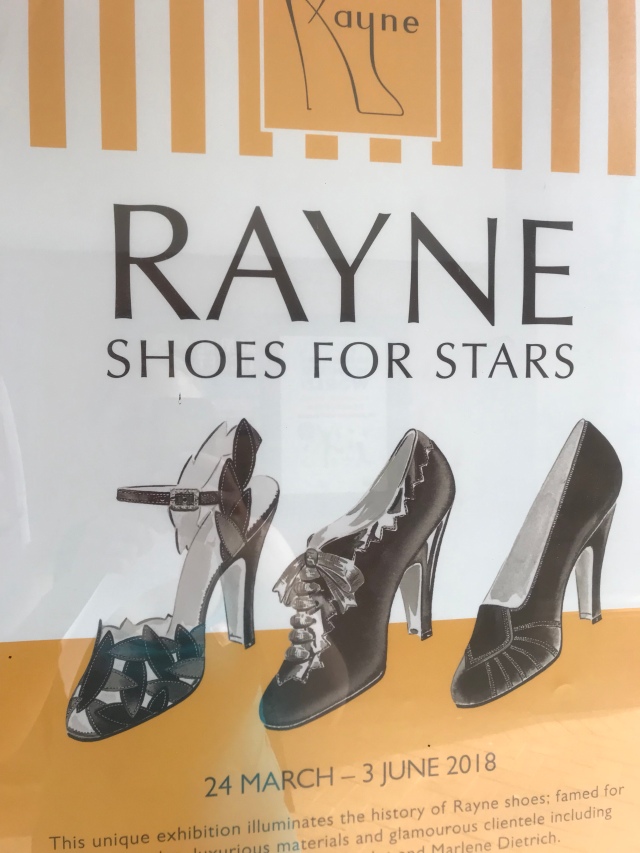 The featured exhibition in the museum was on fashion, focusing on shoes designed by a family who began in London in the 19th century, outfitting stage performers but eventually being given the royal seal.

The museum also has a nice little collection of Pre Raphaelite art. My favourite! I particularly loved this drawing. So curvy. 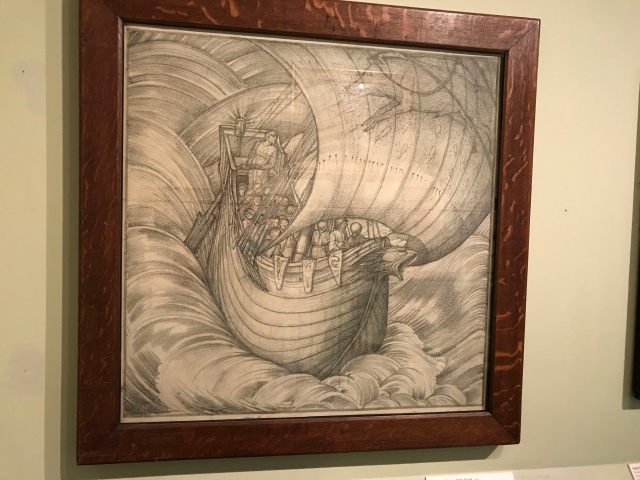 Imagine that as a stained-glass window!

Outside the museum is the castle and on the other side is the cathedral. Apparently the cathedral is a shadow of its former self, parts having been taken over the centuries for other purposes. It’s still a magnificent structure though and worth a visit just for the cathedral ceiling. I didn’t have any change on me for a photography donation so I didn’t take any photos so you’ll just have to go visit yourself and take a look. 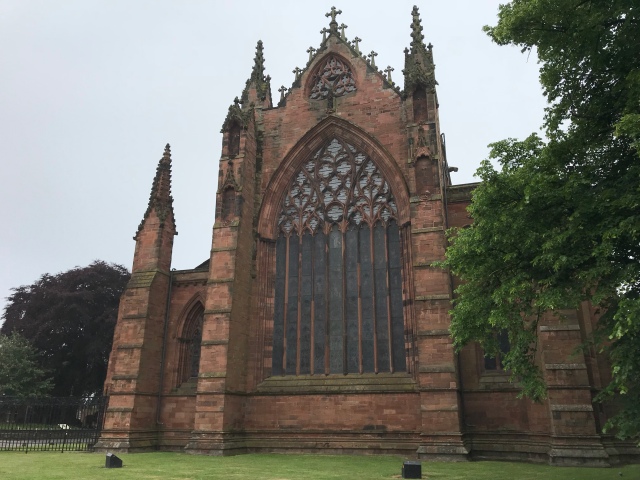 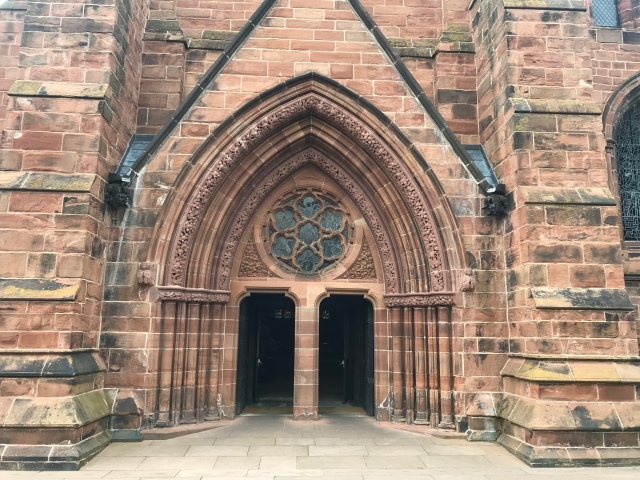 One interesting fact that I noted inside the cathedral is that the monks weren’t supposed to sit for services (which were no doubt interminable) so they made hugely ornate perches along the sides so they could rest without sitting. It’s nice to think even medieval monks were lazy dodgers. 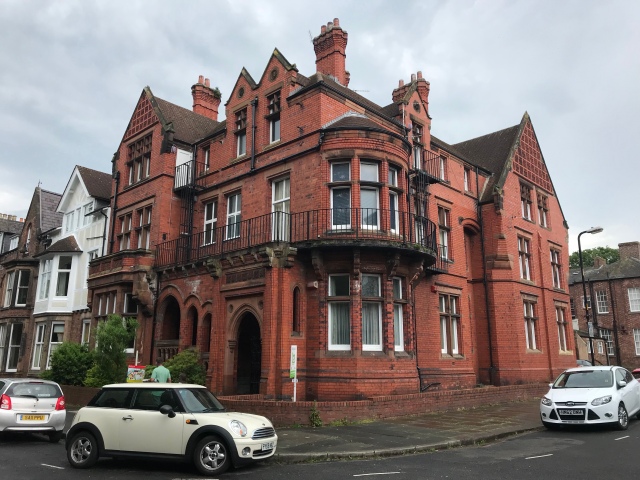 This house was for sale across the road from my bed and breakfast. What a bizarre structure!

After a wander round town and the purchase of a second pair of shorts, I stocked up on reasonably sturdy food (tortillas, apples, hummus and hard cheese) for the following day’s walk. I also bought some eggs which I hard boiled in the kettle in my room because I am a genius.

5 thoughts on “Carlisle – Not As Bad As They Say!”