I wrote this post just after we left Geneva and then completely forgot to post it. So here it is, three weeks late and completely out of order.

It would be fair to say that we probably didn’t get the most out of Geneva. The hot weather combined with uncomfortable accommodation meant that we felt fairly flat. We had three nights and spent almost all but one of our days just relaxing. We did manage to see a few things though and we both agreed that CERN was the highlight. 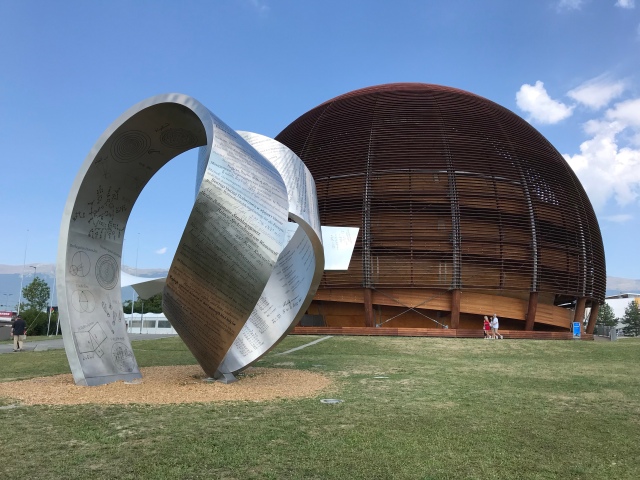 We did do a few other things though. If you look up ‘things to do in Geneva’ the list is pretty sparse.

We looked (sniggered) at the floral clock. 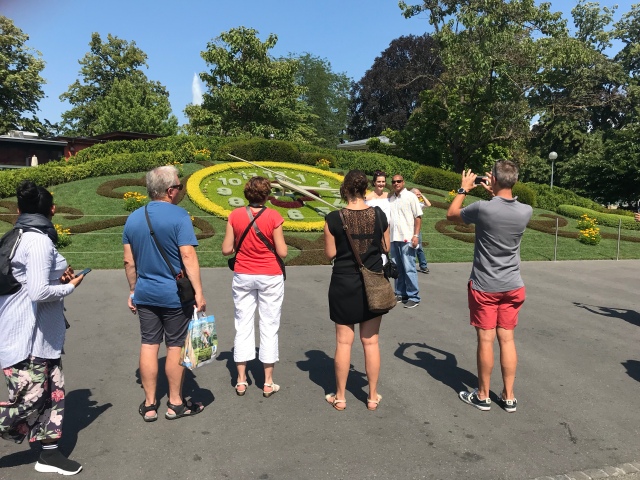 I’m not saying there’s anything wrong with clocks or flowers… well, certainly not with flowers, but if you’re a pretty major city and your floral clock gets mentioned in every ‘Top Ten Things To See and Do’ list, well… that’s not good, is it? Also when we went to Budapest years ago our walking tour guide said that their moving clock was the most over-rated attraction in the city and we couldn’t help but agree. I mean, if you’re a clock fanatic, go for it! You have every right to get excited. But if you’re not normally into clocks then it’s not really a draw card.

We walked along the shores of Lake Geneva. It is a nice lake. People swim in it and the water looks beautifully clear and blue. It has a huge jet of water, much like the one in Canberra. Probably because a single huge jet of water is something I associate with Australia’s underwhelming political capital, I didn’t find the jet in Geneva particularly impressive. We dutifully trotted out along the pier to stand very close to it but it didn’t even reward us with a cooling spray. Lame.

We took a walk around the Old Town too. Thanks to Martin Luther’s no-frills approach to life (he’s the reason Swiss jewellers turned to watch making when they were banned from making fripperies) the old town is kind of lacking in ornamentation. Nice but it’s more plain than most other cities we’ve visited. Apparently it’s more fun now than it used to be…

Geneva does have quite a bit of art and some interesting architecture, possibly due to being seriously multicultural. I probably should’ve mentioned this first because it was actually the best bit. We were staying near Plainpalais, a huge, desert-like square that made us feel like Lawrence of Arabia every time we struck out across it in the Saharan heat. It was the size of a soccer field but all gravel and it must be just as inhospitable in winter. However, there were a number of statues around it, mostly bronze figures that each had a story to tell. Not literally – in fact there was no information anywhere we could find near the sculptures themselves, but I looked them up online and it was fascinating.

One of the sculptures was of Frankenstein’s monster.

Apparently in the book Plainpalais is where the monster kills his first victim and the sculpture has layers of meaning referring to the homeless people and disenfranchisement. Mainly, though, it’s just really neat.

The others you’ll just have to come see for yourself. Also I didn’t take any photos and can’t recall their meanings. Apart from the bronze statues there are several other monuments to various things and the descriptions online are delightfully pretentious. The first night we arrived we walked around the area and saw a bunch of huge neon signs on top of many buildings and couldn’t work out what was going on as they didn’t seem to be the names of businesses or have any intelligible meaning. Turns out they were also art and had certainly achieved their aim of creating dialogue and challenging perceptions. Great stuff.

All over the city were large and small examples of street art. One of the ones I liked best was near our apartment.

We also spent an hour walking around a suburb called ‘Le Grotte’ (somewhat unfortunate) where a bunch of architects had been influenced by… well, can you guess? 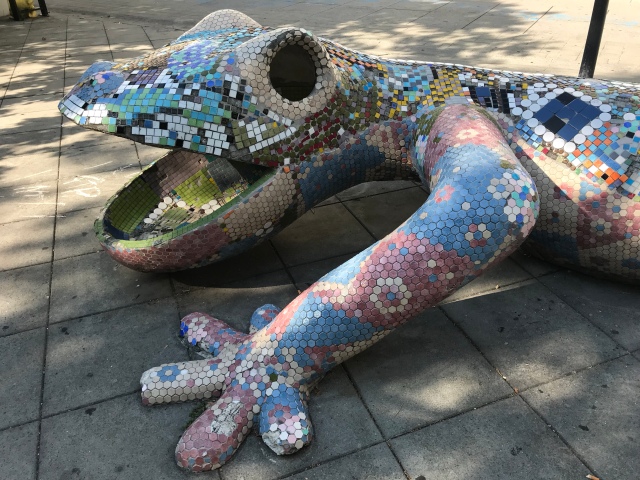 If you’ve been to Barcelona you’ll have shouted ‘Gaudi!’ At your screen, and you’ll have been right. In fact if you have any interest in architecture at all you’ll have picked it up. Lovely organic lines and detail, bold colours and lines. Well worth a look around and right next to the main station too. My photos are a bit rubbish but hopefully you get a bit of an idea. 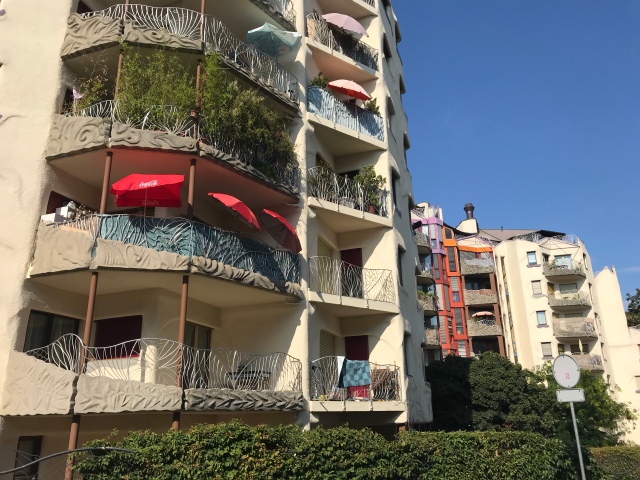 I think we should’ve seen and done a lot more if we hadn’t been crippled by the heat, but at least we saw more than just the floral clock and that’s worth something, I think.