On our way to Lyon from Geneva we found ourselves asking… why are we going to Lyon? We’d had the impulse to add it to our itinerary so long ago that we’d forgotten why. 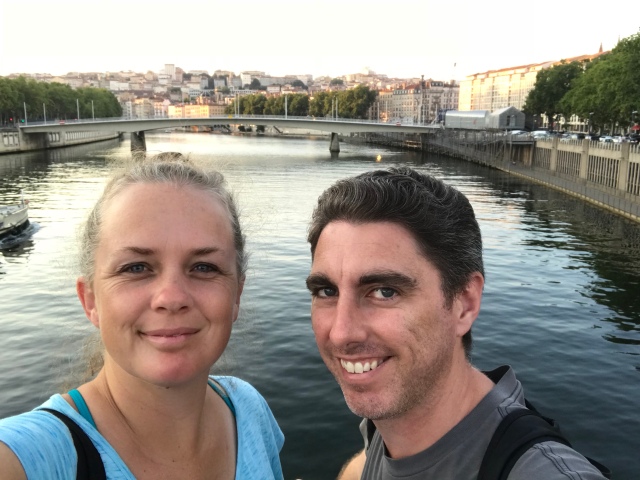 Lyon is the second biggest city in France and we knew almost nothing about it. Food seemed to be the main notable thing, according to the blogs posts I’d read and the YouTube clips we’d watched, although we were a bit hesitant about the bouchons, restaurants that served the local traditional fare – fare that used every part of the animal. Tripe, liver and all that sort of thing featured heavily but fortunately there were other things to choose from. 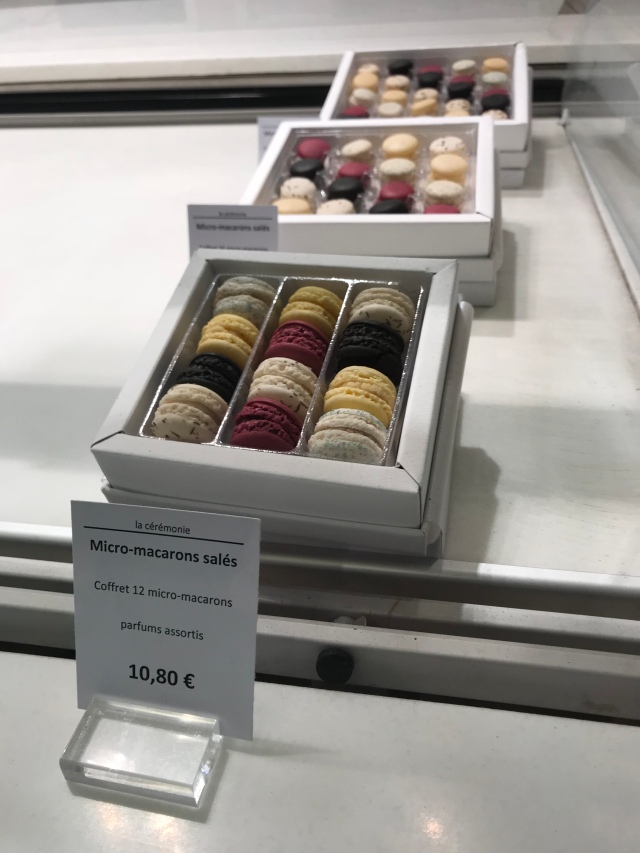 First we checked into our hotel, a Best Western that gave us a tiny room but it was air conditioned (thank god – Lyon was our hottest destination yet at 37 degrees each day) and the location was perfect. Just across the river from the old town and around the corner from many galleries and restaurants. Although, to be fair, if you’re in Lyon you’re near restaurants. The city has more per capital than any other city in France… maybe in Europe. 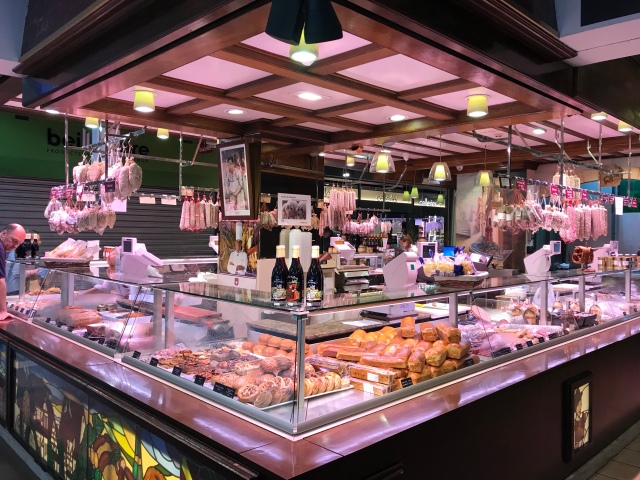 Our first impression of Lyon was very good. It is a vibrant city where things are in good repair and, despite the heat, we were keen to get out and see it so we took a walk to Les Halles for a look around the food counters then lunch – a croque monsieur (the best we were to have during our stay) and some French wine. A very nice waiter gave us some advice on what to see in the city. 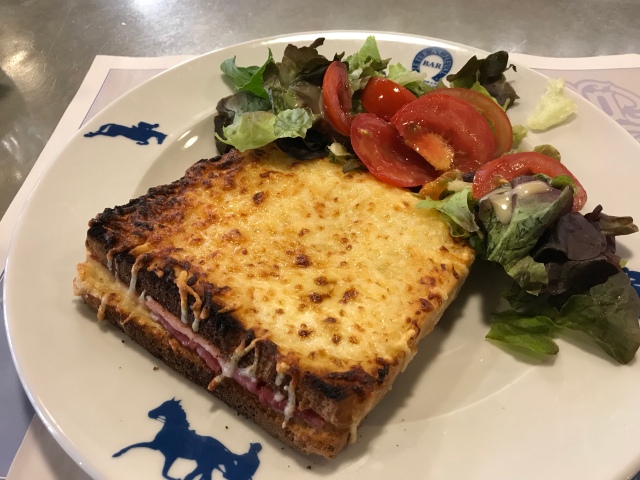 On our first full day we used a Lyon Pass. €25 for 24 hours and it included all museums, galleries and public transport. Here’s what we chose to do.

1. A ride on a city explorer train-car thing. 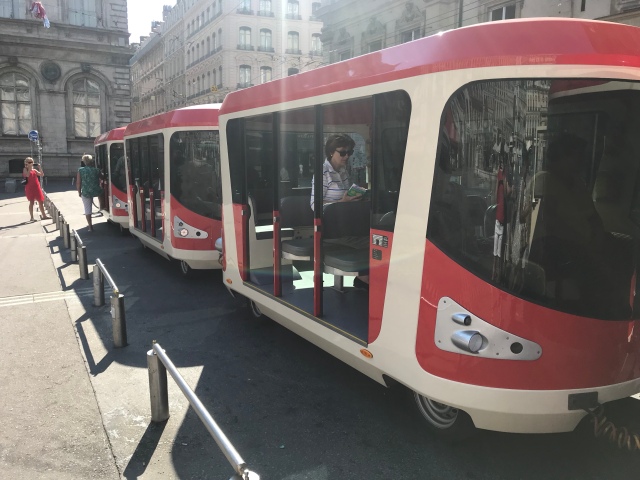 Like a bunch of little carriages towed along by a little train thing. To be honest, I think they look stupid and probably annoy the locals but it was included in the pass so we took it. The commentary wasn’t great, the volume was too low but it wasn’t a bad way to spend 40 minutes while we waited for the fine art gallery to open. Also we got to see the largest mural in Lyon. 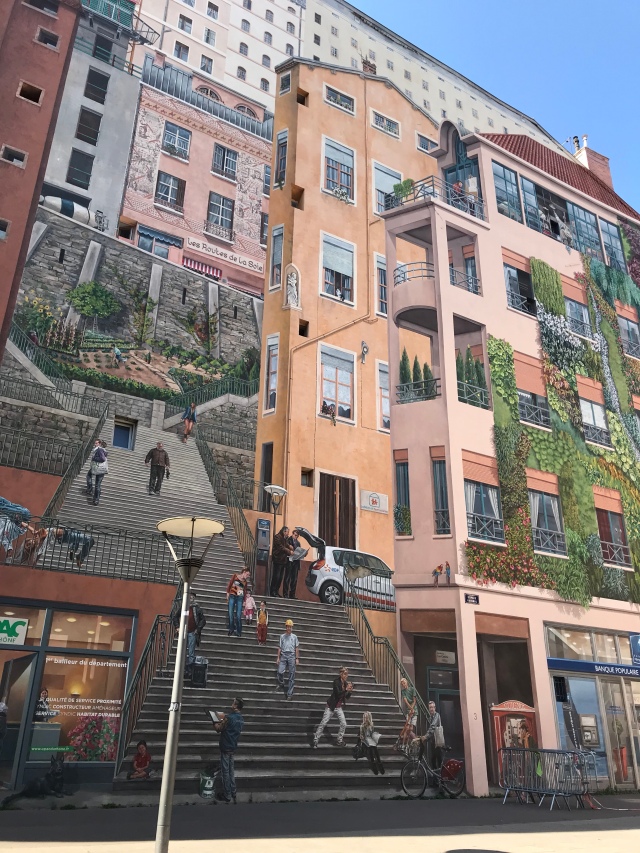 The city of Lyon commissions huge trompe-l’œil murals and they are fantastic. Unfortunately they’re pretty spread out so we only saw a few but they’re really worth seeing. I couldn’t find a map online so here’s a photo of one if you happen to go to Lyon and want to find them. 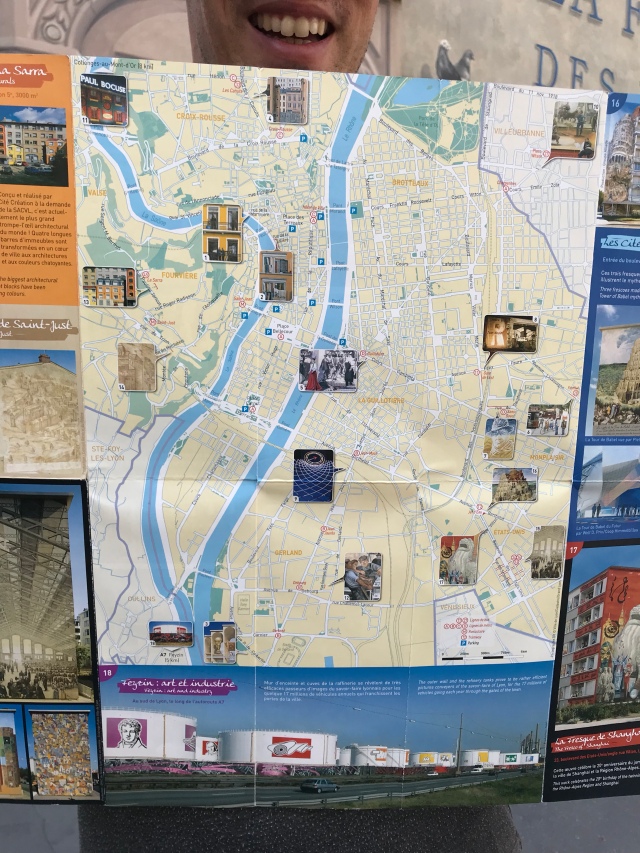 Here’s my favourite – the theme was books! 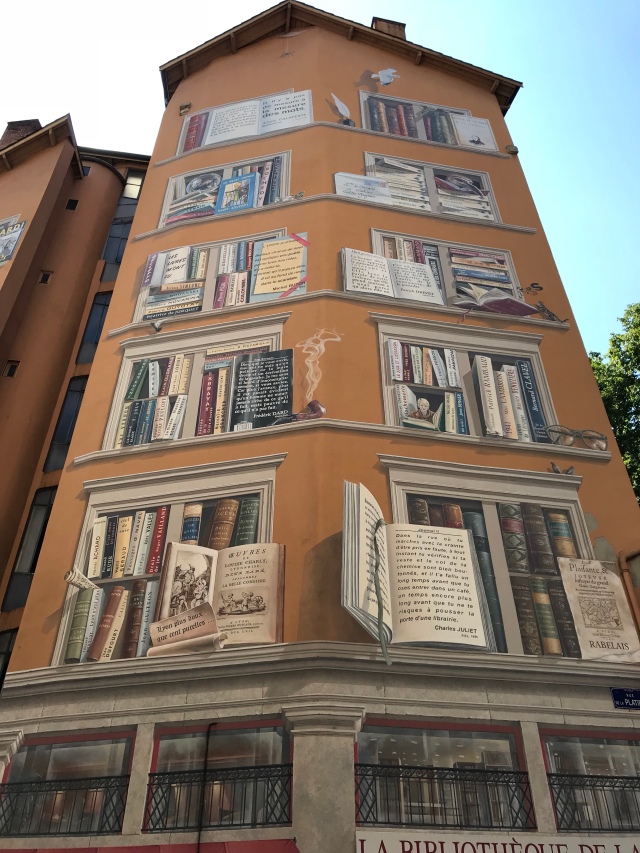 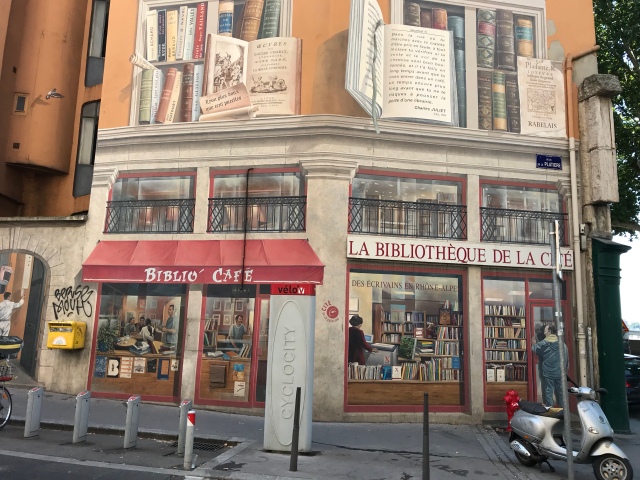 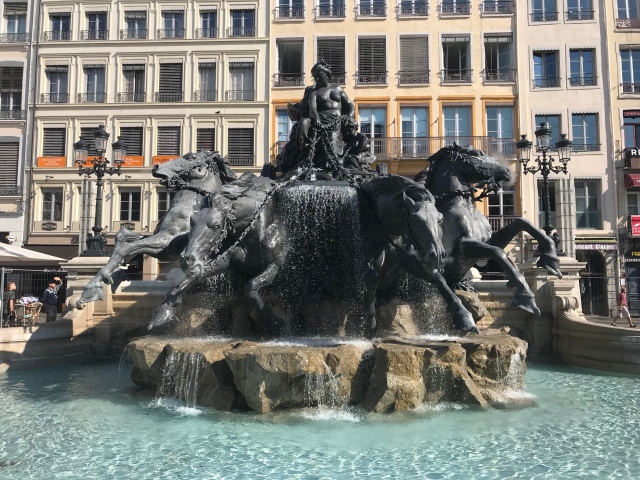 The museum has a pretty impressive collection that spans over 2000 years. My favourite of all was this one. A painting of a photography session is a pretty unusual subject and even though photography had a huge effect on realism, this painter captures a lively and detailed scene, which the photographer probably did not. 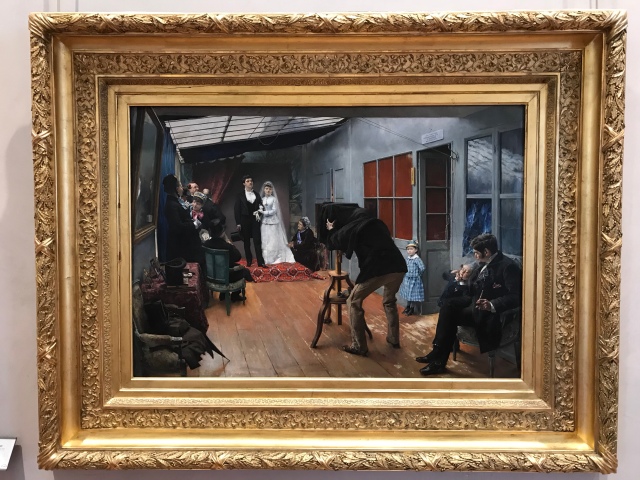 We didn’t look at everything because I can’t handle looking at a thousand paintings in one day plus we didn’t have time.

Next we headed down to the southern end of the central peninsula to see the new Museum of Confluences. We didn’t really know what to expect, we had just read that it was an interesting building. 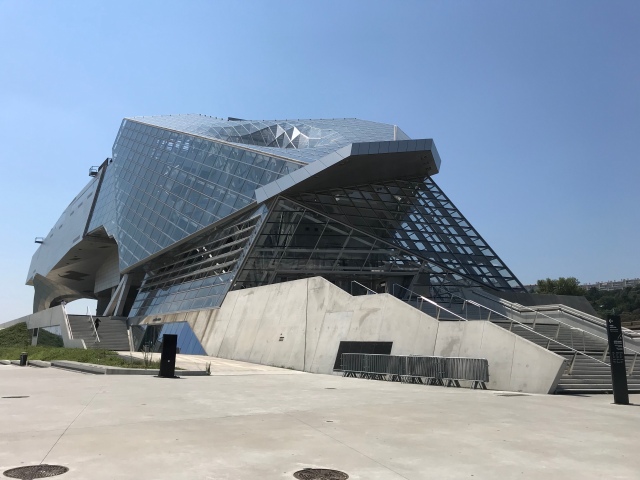 Which it was. Turns out it’s a science and natural history museum. Good displays and a surprising number of Australian Aboriginal artifacts. They were part of every single room and probably second in number only to French artifacts. If anyone knows why this is please leave a comment because we found it a bit odd. 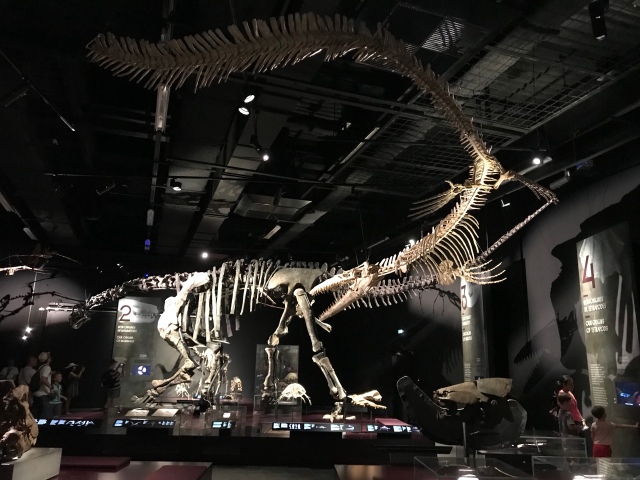 4. Next we took a bus then a metro train to the Old Town to visit the Miniature and Cinema Museum. It was a bit of a strange one. Everything in it had been collected by a man who made miniature scenes but the majority of the collection was Hollywood memorabilia and every item was original and had been used in films. 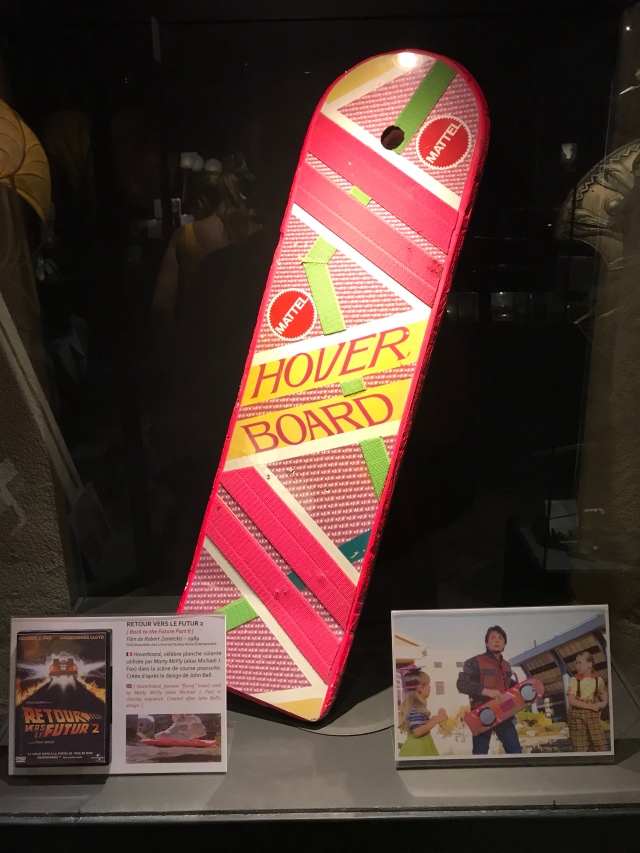 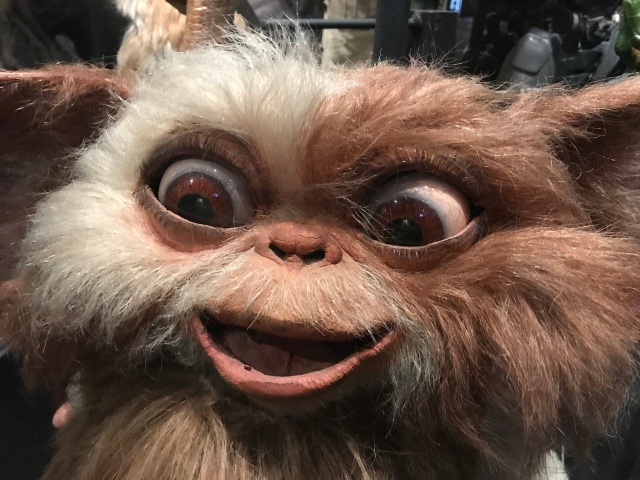 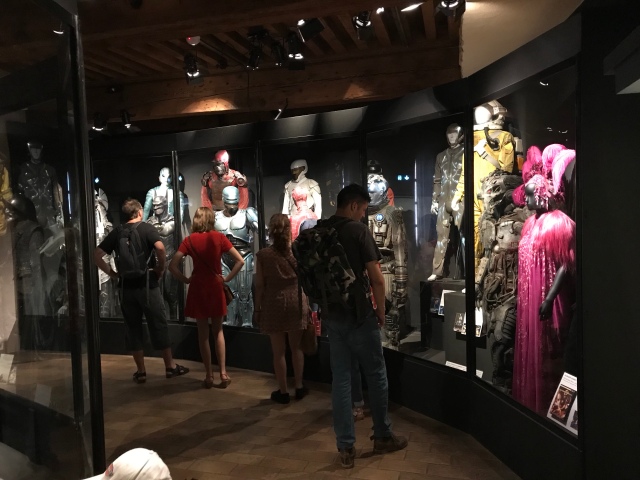 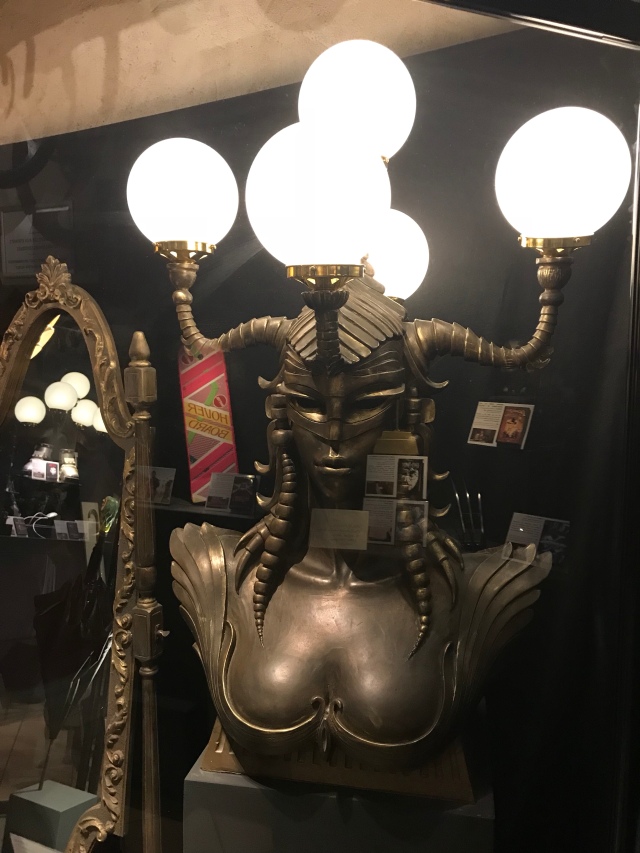 Lighting from The Fifth Element, probably my favourite item.

There were whole scenes from Perfume in the basement, then costumes, models, puppets and animatronic creations. Some very old and some very new.

5. One of the last things we did was catch a funicular up to the church at the top of the hill behind the city. The funicular ran through a tunnel, which was a bit of a disappointment but the view over the city from the church was very good.

By this point I wasn’t feeling great and I’d also noticed a few people with dogs in the Old Town and they’d had tight muzzles on their dog’s mouths in the extreme heat. Dogs can’t cool themselves if they can’t pant and some looked quite distressed. I couldn’t say anything to these people because I didn’t speak French and this, combined with being tired and hot, really upset me. I’d had enough and even though Luke could’ve done more we ended up going back to the hotel for a rest.

In the evening we tried to fit in a river cruise but the boat wouldn’t go with less than 20 passengers and so we missed out. We took a walk through the old town and had dinner at a charming restaurant that was totally over the top in terms of decor but did lovely food and had a great waitress who spoke excellent English. 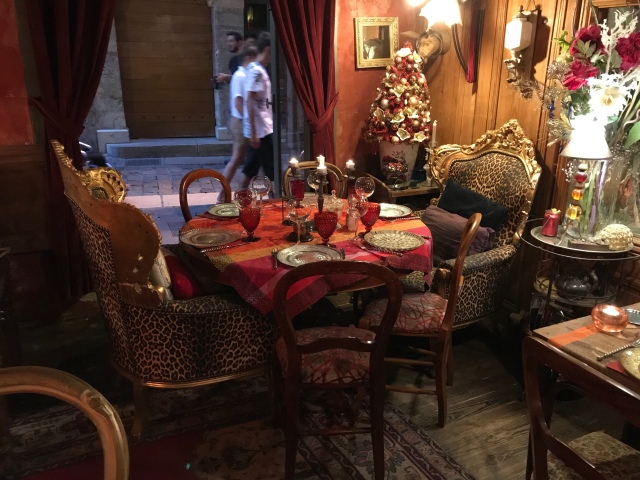 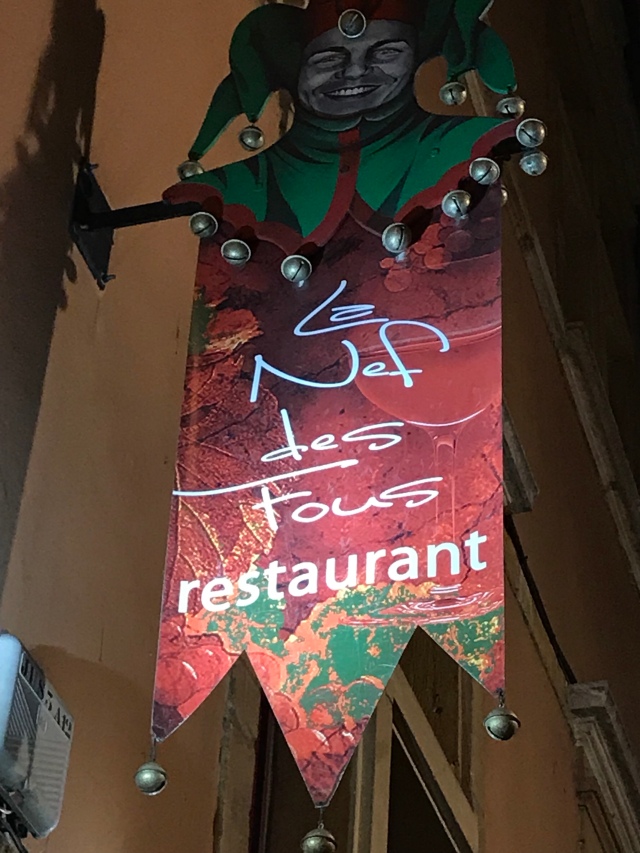 We didn’t end up going out for dinner until about nine pm and didn’t finish until eleven. Finally we are getting used to these late dining hours!

At many places in France a two or three course meal is offered for a set price so we had an entree, main and dessert but none were too big or heavy and it was very nice to sit over dinner for a couple of hours, especially in an air conditioned room.

Next: more Lyon and then we arrive in Nice.