This was our first trip to Chiang Mai and I hadn’t heard a bad word about it from anyone – but I also didn’t really know what to expect either, except for markets, markets and more markets. My only goal for the week was to find a decent tailor and Lea wanted to spend a day with elephants.

Flying into Chiang Mai was certainly more impressive than landing in smoggy Bangkok. Big green hills covered in tropical forest sit quite close to city and, for the second largest city in Thailand, it has a relatively small airport and few tall buildings.

We caught a taxi to our hotel – Rimping Village. Sitting just over the Ping River from the heart of the city, the hotel had quiet and green grounds and a decent sized pool sheltered by an enormous rubber tree that was filled with epiphytes. 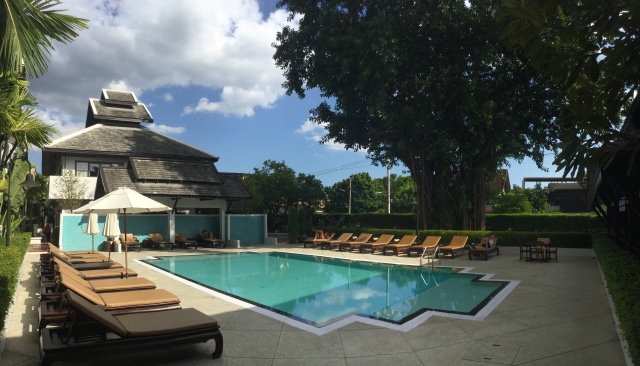 The hotel grounds were full of orchids of various colours, shapes and sizes as well as several frangipani trees. A little oasis in a very busy city.

One of the first Chiang Mai icons we became familiar with was the Iron Bridge (locals pronounce it ‘eye-ron’, this is important to know when telling a taxi driver where to go!), which didn’t look at that impressive to us by day but certainly attracted hordes of self-taking teenagers and fishermen at night. It also just seemed, despite being quite narrow, to be a place to just hang out. People of all ages draped themselves like wet socks over the rails as soon as dusk descended. 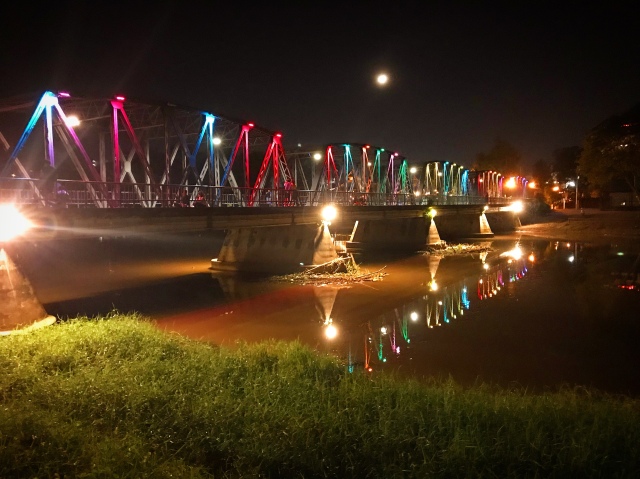 While the locals assured us it was winter (ha!) and did indeed walk around in jeans and jackets, it was still 34 degrees during the day and felt about 40 if you were out in the sun in the breeze-less city. We mostly stuck to the pool during the day and wandered out at night.

This was our only whole day, relatively expensive, excursion in Chiang Mai. There are many elephant parks around the city but this one is exceptional as a refuge for elderly, injured, and mistreated animals (dogs, cats, buffalo, horses and more as well) and the respect and love the staff have for the animals is evident everywhere. If you are thinking of visiting an elephant sanctuary I highly recommend this one.

We were picked up at 8:30 from our hotel and our group of six for the day included a nice couple from the UK – Duncan and Fiona. During the hour’s drive out into the forest we watched a video on the rules of how to behave around elephants – most of which we ended up breaking at some point during the day.

Our guide was a funny young man named Dave whose love of elephants became more and more obvious as the day progressed. He told us about his favourite elephant dying recently of old age and how, for weeks after, he could not talk about him without crying.

Our first stop was a walk along a forest track with three female elephants. Dave and the mahouts gave us bags of bananas and sugar cane to put in the elephants’ trunks. It was a bit intimidating as they could almost eat them faster than we could get them out of the bags and being followed closely by a hungry elephant is quite a memorable experience. 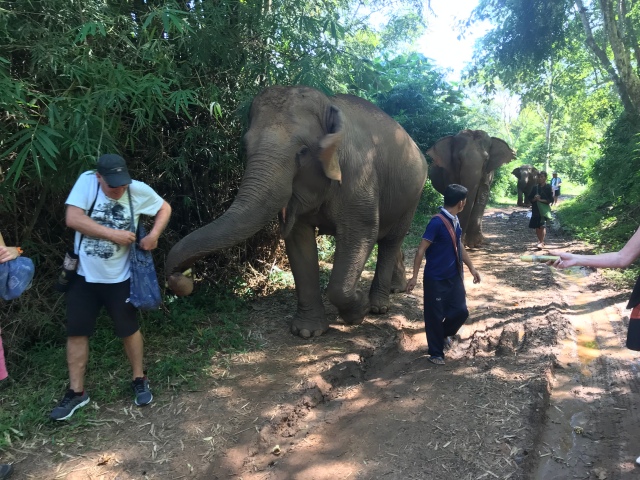 Pete is pestered by a persistent pachyderm.

Next was a tasty vegetarian lunch in a hut where we waited for the next group of elephants. 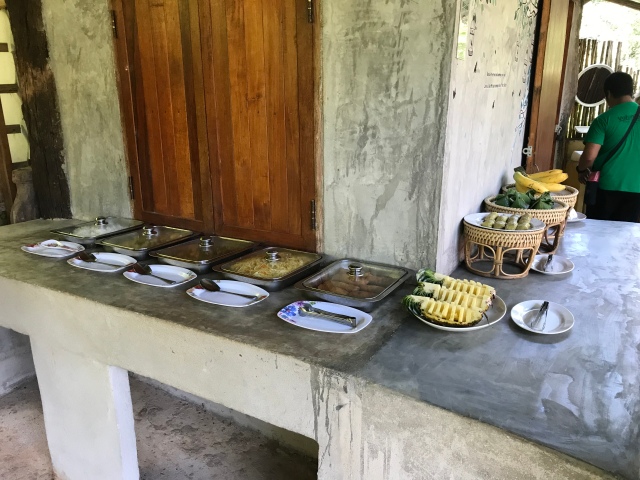 We helped prepare food for elephants who were on a high-calorie diet after being semi-starved by their previous owners who wanted to keep the elephants small to make it seem that they were younger than they really were – younger elephants can be sold for more money.

We chopped up watermelon and made balls of rice and dried fruit that had to be put directly into the elephants’ mouths so they didn’t fall apart. 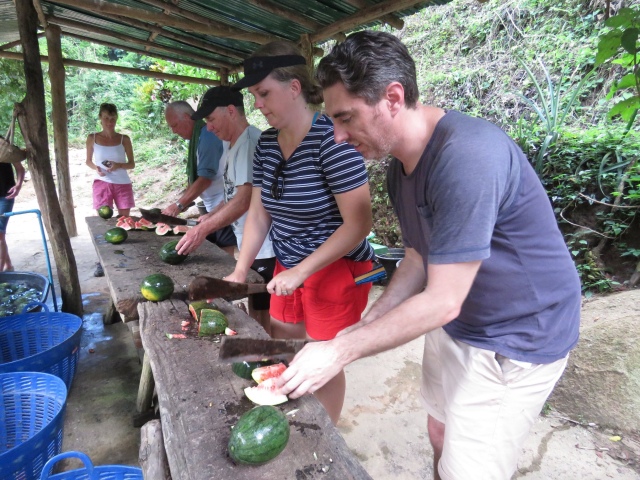 Apparently elephants don’t have to wait an hour after eating before going for a swim as we went straight to the river and got in with buckets so we could splash water all over the elephants. One went out into the deepest part of the river and completely submerged itself and rolled around. I was very glad to have my reef shoes for this part of the day as submerged and slippery rocks were a bit of a hazard. 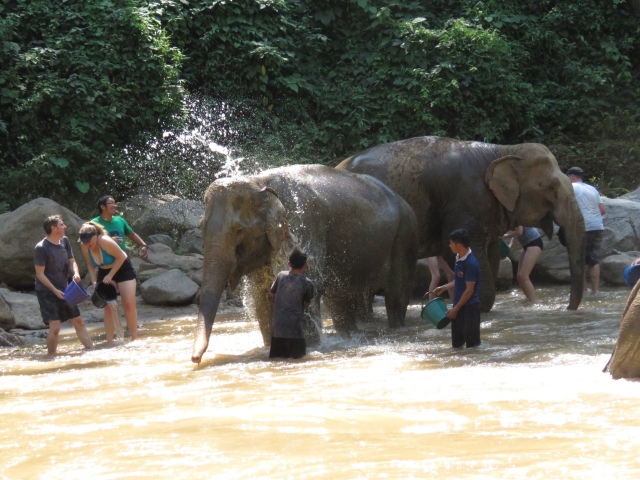 To get to the main camp we got into rubber boats and did a little bit of white-water rafting down the river, passing some bathing elephants along the way. 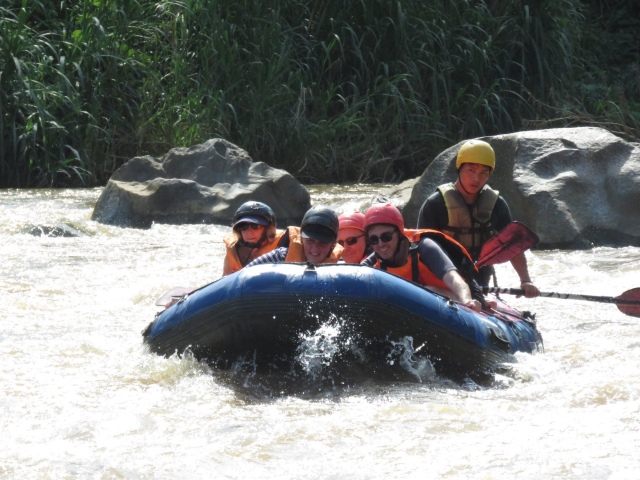 The Elephant Nature Park lets most of its elephants roam free around the reserve with their mahouts, who are there to protect and help feed them. Newcomers are restricted to the inner grounds and sleep overnight in shelters with sand heaps(for lying against), water and four nightly feedings. 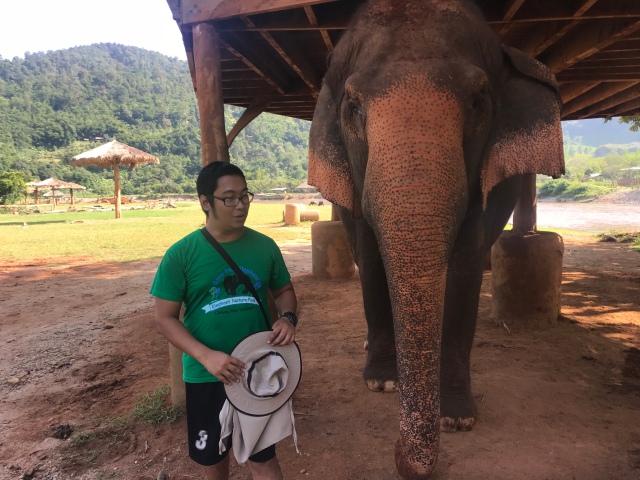 Dave with one of the oldest elephants at the park. I think she was in her 80s!

It was interesting to learn that the elephants at the park choose their mahouts rather than the other way round. Some mahouts come with their elephants to the park and some meet when they arrive. All the mahouts seem to spend most of the day lying in little cabana shelters or wandering next to their elephant. It would have been very interesting to talk to one of them about their job.

The last thing we did was walk around the sanctuary and see the newer or more injured elephants. One was completely blind thanks to a cruel owner’s punishment. Another had a deformed foot after stepping on a land mine. While the stories at the ENP are often tragic, it is heartening that places like this exist and so many people come to volunteer their time to take care of the animals.

An incredible and emotional day that we all enjoyed!

To finish, here are a few of the gorgeous dogs that are up for adoption should anyone visit the sanctuary and want to take them home. 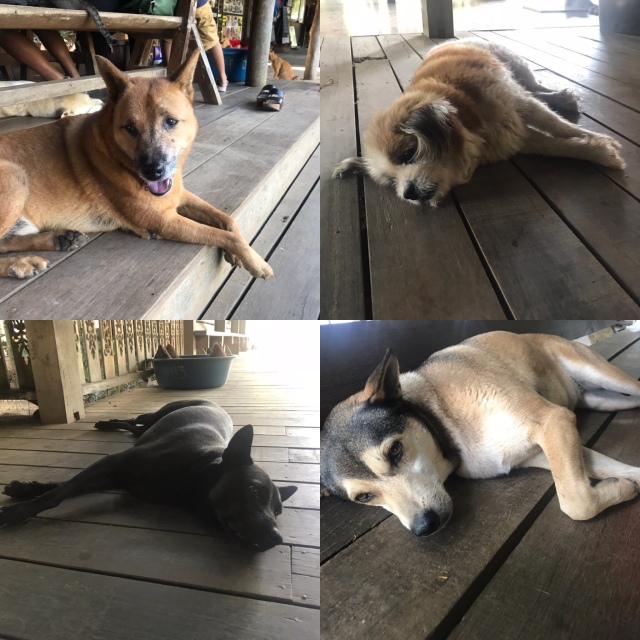 Every one of the 600+ dogs at the sanctuary is named and many are adopted by people in other countries, especially Britain. No surprise to me after seeing all the dogs in the UK!