Today I once again woke up at stupid o’clock so I walked the mile down to the lake to have a look before breakfast. At least it’s a chance for photos without hoards of tourists.

This is one of the most famous buildings in the area, imaginatively named Bridge House. How do they come up with these things? 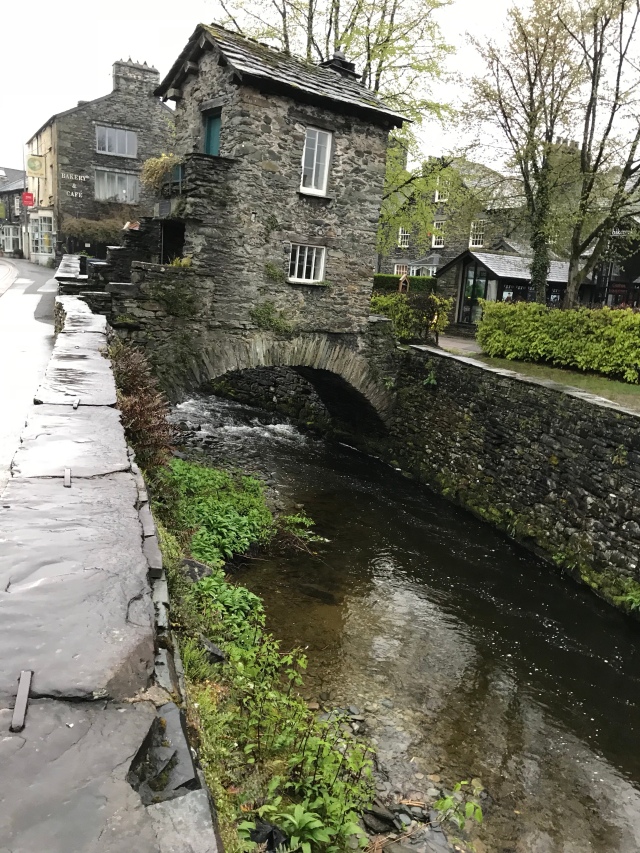 I also looked in the window of the realtor’s and picked out a few places that were just what I’d like for a holiday cottage if I sold everything I owned. This area is not cheap!

I also noticed this intriguing display. An unusual way of rounding up the mentally ill, but no doubt it works. 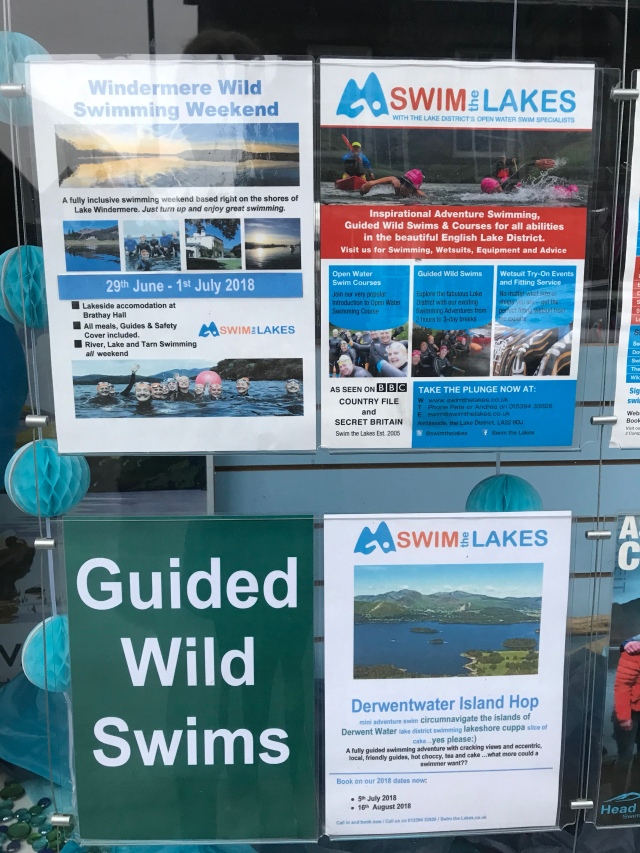 At breakfast I discovered that my American friend from The Sun in Coniston also happens to be staying at The Queen, so we ate breakfast together again and talked about our plans.

Soon after I set off across Ambleside walking without my big backpack and it was marvellous! I headed east out of town, thinking I might just wander around and end up on Loughrigg Fell. I have learned, since I got back, that it is pronounced ‘luffrig’, which is probably the only pronunciation I didn’t try out on other walkers on my way back.

First I walked toward Lily Tarn, or I thought I did. I found a small tarn, then another and then another. I wasn’t sure which was actually the one on the map, but it didn’t really matter. The whole area of Loughrigg Fell is surrounded by roads and villages, it’s pretty difficult to get lost for more than ten minutes.

I walked up to Todd Crag and between two rocky outcrops that perfectly framed an outstanding view south over Windermere, with Ambleside to my east. It was truly breathtaking and yet another walk where I hadn’t seen a soul. 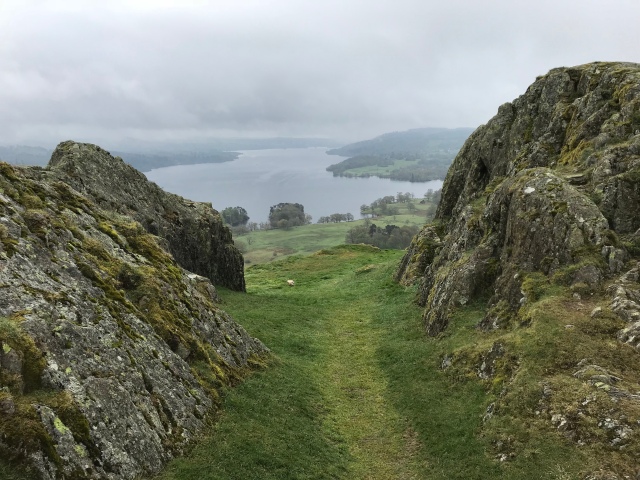 I then struck out towards Loughrigg, which was pretty easy to get up. Although there was a place marked, rather ominously, ‘Black Mire’ near the path. The views from the other side were equally splendid – over to the Langdales and all the shades of green and rusty red. The weather held out and I had a good wander around taking photos.

As I headed down at about 11am I passed the first of dozens of groups heading up the hill. Several people were even fooled, by my serious-looking coat, map and sticks, into asking me for advice and directions, which I spread around liberally without hesitation.

After a pub lunch of fish and chips I visited the laundromat to get the worst of the mud and stench out of my clothes. It’s the first laundromat I’ve ever been in that didn’t sell laundry powder. Luckily there was a machine that still had quite a bit in the slot – I wasn’t about to buy a whole box for one wash. Then I bought a few bits of food for the next leg – which is a bit up in the air at the moment as I’m waiting to hear back from Australasian friends who happen to be in Ravenglass at this very moment, and I’m trying to convince them that a trip to the Muncaster Cumberland Sausage Festival would be a good idea. We’ll see how it pans out tomorrow. I’d be happy to spend another day in Ambleside walking over the hills on the other side of town.

Dinner in the pub, some blogging and reading The Elements of Eloquence by Mark Forsyth. A surprisingly readable book about rhetoric but not enthralling enough to keep me awake. There’s only so much I can take in about anadiplosis, hyperbatons an aposiopesis. Especially after a pint of quite strong scrumpy.

10 thoughts on “One Day In Ambleside”