Keen observers will note that Ambleside isn’t anywhere near the Cumbria Way – I made a diversion late in the day via bus because there was no accommodation in Elterwater. But I shall begin at the beginning!

I had a mostly lovely day’s walking. When I set out from Coniston the sun was out, the birds were singing and I stopped far too frequently to take photos of the countryside and listen to fighter jets zoom overhead as I passed through Tarn How Wood. I watched one come up the valley, flying really low. Another classic Lakeland experience! 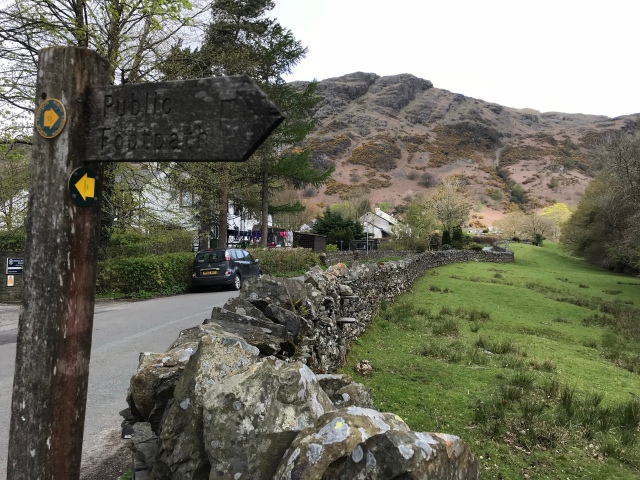 I met a group of ladies who were also doing the Cumbria Way and they goggled at my pack. They told me they were stopping at The Old Dungeon Ghyll, probably the most famous walkers’ pub in the Lakes (well, in my limited understanding) but I had a strong feeling I wouldn’t get that far that day, which turned out to be correct.

At some point I took a wrong turn. For most of the walk I had assiduously checked my map every five minutes but I walked through a field of adorable sheep and terrific views and I think I missed a turn. 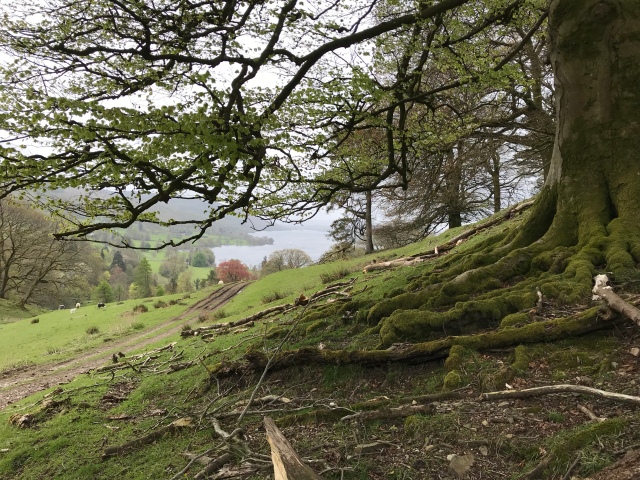 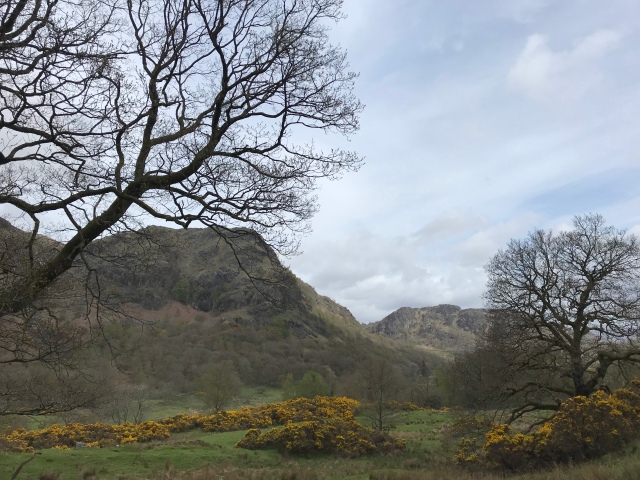 I ended up heading back south towards Coniston Water instead of north to Tarn How. Fortunately I found a local in my wandering and he looked at my map and set me right and I wasn’t too far out of the way. I ended up walking through a beautiful forest and saying hello to a lady who was also off on a solo camping expedition, the only differences being that she was on a horse and also (I imagine) not suddenly filled with raging jealousy, like I was. Then I remembered that I’m allergic to horses so it’s probably just as well I didn’t try to mug her.

Eventually I made it through the forest and found public toilets, right after spending the previous hour wishing I could find one. How fortuitous! Also it turned out that Tarn How is a super popular spot that people can even get around in wheelchairs so it’s not surprising that there were public toilets. I was grateful anyhow, and walked around a corner of the lake. I’ve heard it described as one of the prettiest tarns in the Lake District. Personally I think it was ok, but maybe the weather wasn’t doing it justice and it didn’t really compare to the magnificence I’d walked through on the previous four days. 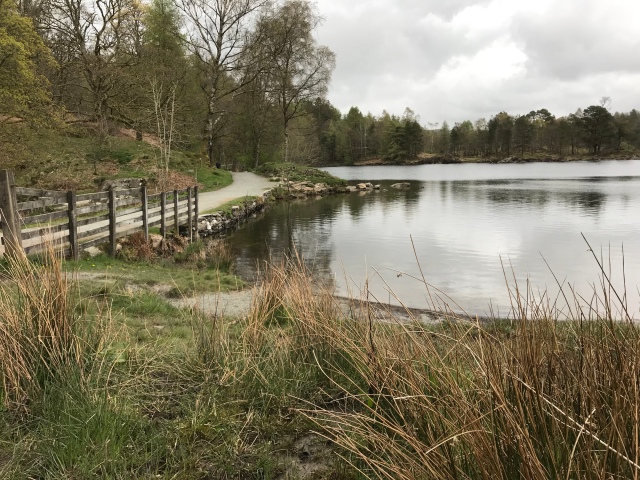 I talked to a man who bore a startling resemblance to his bulldog and we discussed dog training for a while then I headed off again, away from civilisation. 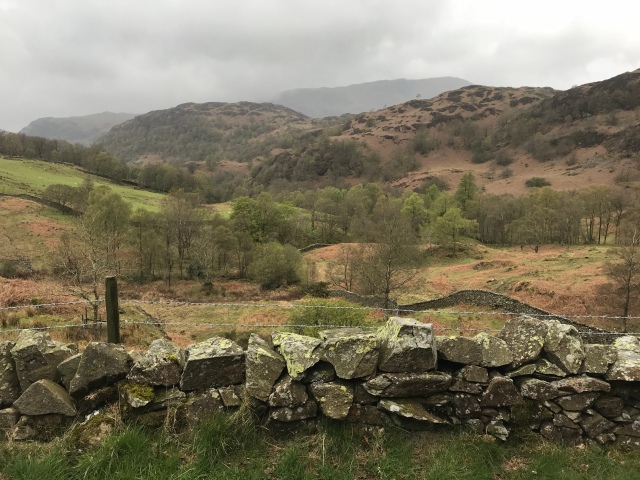 This was the bit where the rain started, and it didn’t stop for the rest of the walk. I decided to cut a section off and walk alongside the road for a bit. At one point I heard a loud ‘HELLO,’ and who should I see cycling past but the landlord of the Stan Laurel where I stayed in Ulverston. I literally know two people by face in this whole corner of England and I walk right by one. What are the chances?

I found that the combination of nice solid and flat road surface and rain really sped up my progress and I made it Elterwalter fairly early in the afternoon. I’d set off from Coniston at about 10 and got to Elterwater at about 2:30. I stopped at a fancy hotel, the Eltermere, for a rest stop and had a nice scone with jam and clotted cream, made even more pleasant by their open fire right next to me. 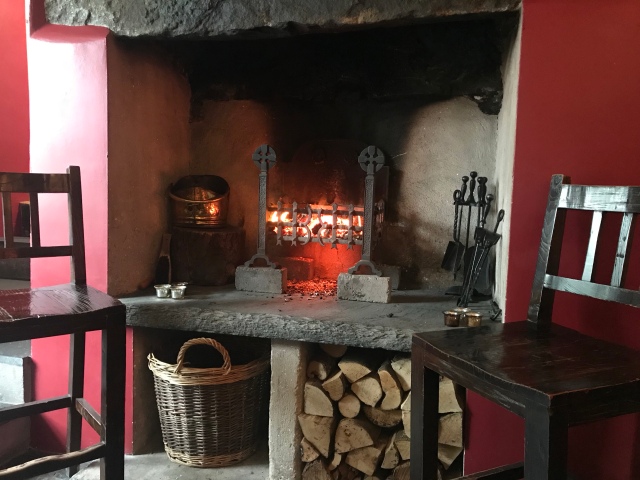 I looked up the accommodation nearby and realised Luke and I stayed at The Britannia in Elterwater last time we were here, but nowhere had rooms and the bus to Ambleside left in five minutes so the choice was made.

I ended up at The Queen’s Hotel, and it was much cheaper than The Sun, although also not quite as nice. I ended up sitting at the bar and chatting to the dour barman and the upbeat barmaid all evening. Well, when I say ‘all evening’ I mean until 7:30, when I went to bed to read and then was asleep by 8:30. 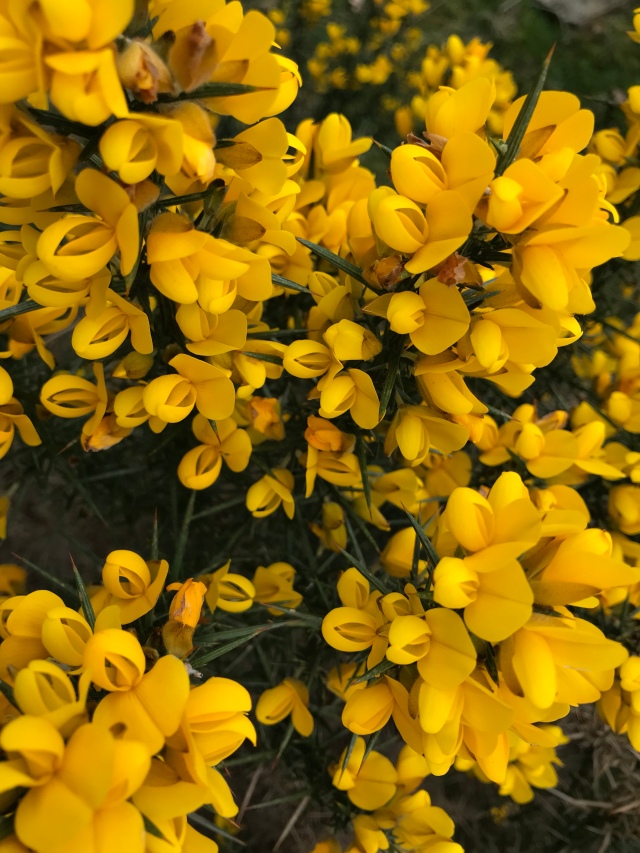 Travelling is tiring! Even though I’m not working I feel exhausted by the middle of every afternoon. Do you find this when you’re on holidays? Maybe I need to develop a coffee addiction so I can push through 🙂 .

6 thoughts on “Coniston to Ambleside”