We caught the bus from Cambridge to Oxford via Milton Keynes. There was a man on the bus who smelled so strongly of cigarette smoke that we had to move away from him. Still, at least he wasn’t cutting his toenails like the guy on the bus we caught to Heathrow a while back.

We arrived in Oxford around 1:30 and paid to leave our bags at the Oxford Backpackers. Four pounds per bag wasn’t a bad deal and the staff let us use the toilets too, which was nice of them.

We set off for a wander around town. Obviously I had to take a photo of this pub, almost next door to the school Ronnie Barker attended and named after one of the most famous Two Ronnies comedy sketches. We would’ve stopped in for a drink but it’s a Wetherspoons – urgh. 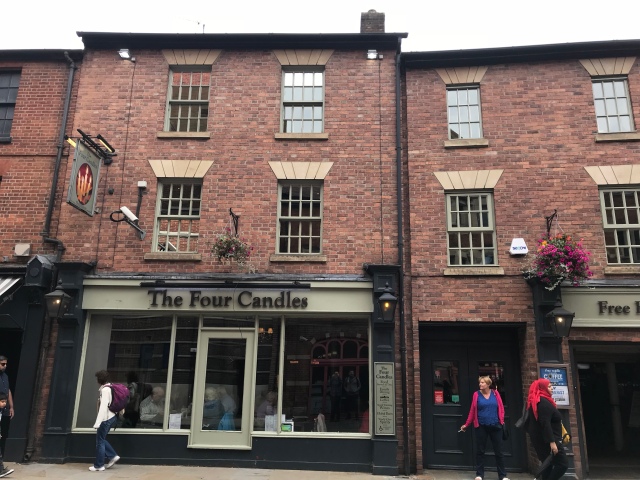 First stop was lunch at the Eagle and Child, the pub frequented by the illustrious Inklings, who included JRR Tolkien and CS Lewis. 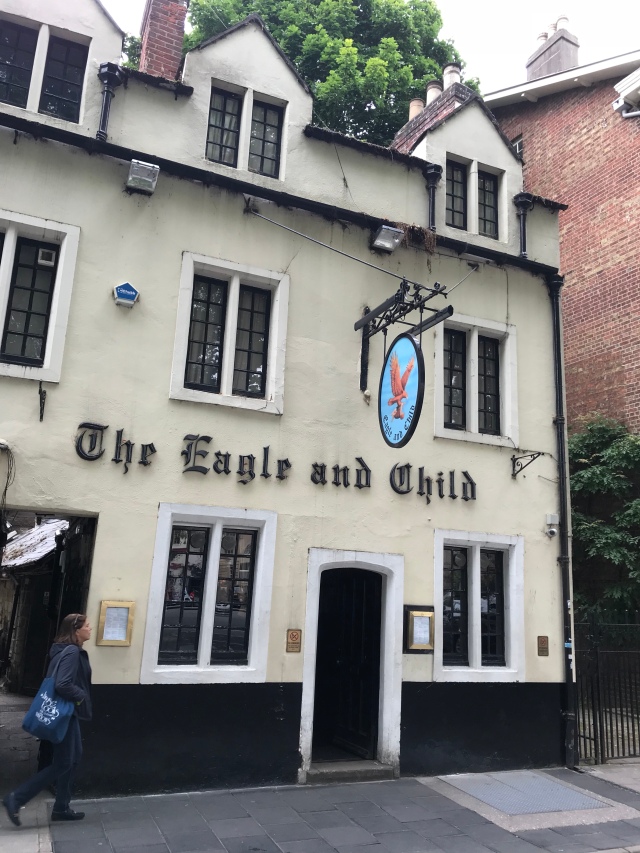 It’s a smallish, dark and pokey pub that was heated to a startling temperature, but at the very back was a room that was less like a Saharan midday and had enough light to read the menu. We shared a chicken and chorizo pie that wasn’t half bad and left feeling fairly satisfied.

Next was a walk around the Natural History Museum. It looked a lot like the one in London but on a much smaller scale and was also free to enter. 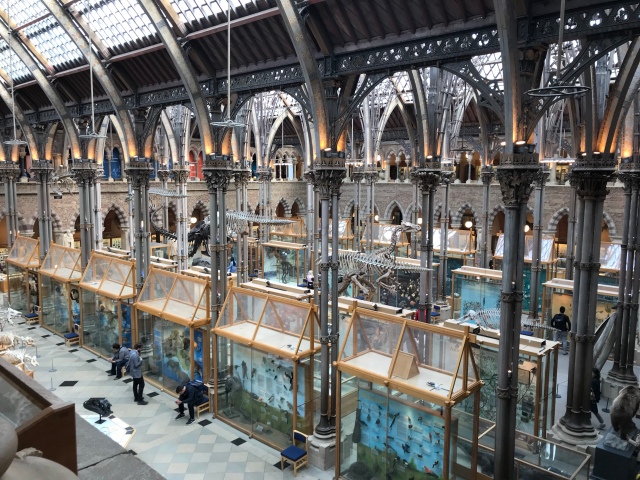 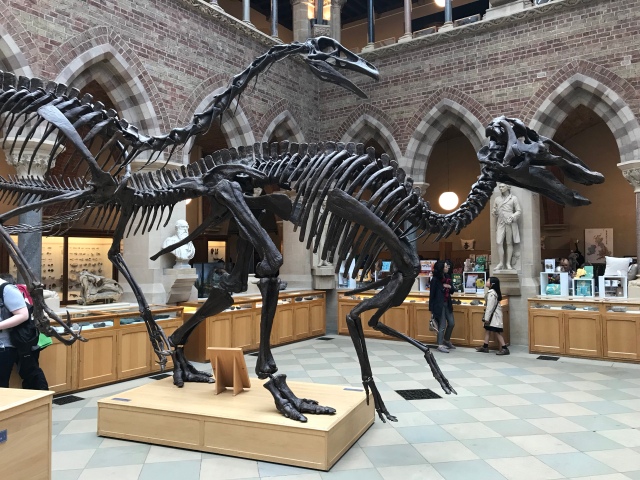 There are a lot of interesting things to see. One of the exhibits that grabbed my attention were a gigantic wasp nest that was grown deliberately by some psychopath.

They had a good insect display with a few cases of live bugs including giant cockroaches. Another good section was a history of British culture with some great graphs showing immigration patterns across the centuries and one showed how different languages affected place names.

Our last stop was a Tolkien exhibition in the library that is opposite the Radcliffe Camera. Although it wasn’t large it did have a good number of original items on display and I thought the artwork was most interesting. Tolkien designed the dust jackets and illustrations for early editions – and drew all the maps of course. I had not known that he was born in South Africa, although his family moved back to England when he was three. Sadly photography wasn’t allowed so here’s a photo of the Radcliffe Camera instead. 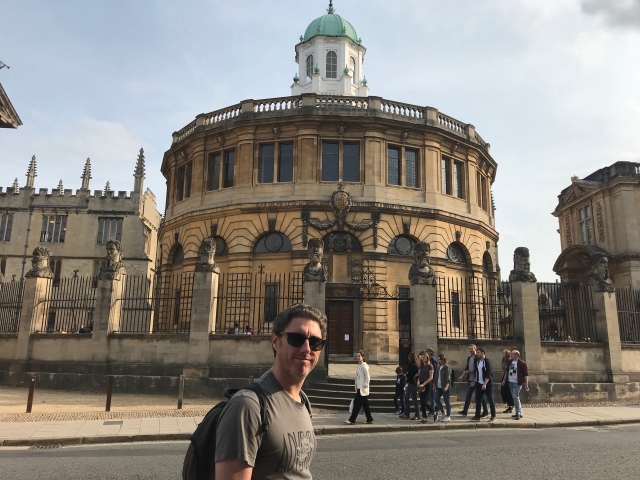 We had a short walk through town before picking up our bags and heading to our Airbnb. As we booked this trip quite late we’d decided on just a room in an apartment. When we arrived the owners told us we’d have a continental breakfast provided every day – a nice surprise!

Our last day in New York had seen temperatures below zero, so we weren’t all that sorry to be flying south. We’d booked cheap flights with American Airways and were detouring via Washington, which still only meant we spent three hours in the air, which wasn’t too bad.

A few notes on our flying experience. This time we did have to take off our shoes and go through those body scanning machines – our first time. It seems a trifle strange that we have to do this for internal flights and not coming into the country. It sort of suggests that they think the terrorists are already here. Our transfer between flights was the shortest I’ve ever had – we literally walked off one plane and our next flight was already boarding at the gate next door. There was time to go to the toilet and that was it. Cutting it a bit close! Apart from that it wasn’t a bad experience. I always read about people having terrible times in domestic US flights but we had no problems. I was just glad I didn’t wear my 14 hole boots. They take about 15 minutes to get off and put on.

Our taxi driver from the airport was the most talkative yet – an older guy from Vietnam. We could hardly understand anything he said but he was very keen to say it. Telling us the area we were staying in was good and all about his family who live in Springvale in Melbourne. Almost everyone we’ve met around the world knows someone from Melbourne, or so it seems.

Our deluxe accommodation. It looks just as grand on the inside, don’t worry.

We’re staying in an Airbnb house that is supposed to be shared but the guy who lives here is away and there’s no one else staying here so we have to it ourselves. Which is just as well because the room we’re in is adjacent to the kitchen and we’d have people walking through it. The house is pretty old, with peeling paint and looks like nothing has been fixed, ever. It’s got a claw-footed bath, which is nice, but the water doesn’t drain properly and by the end of a shower it’s a quarter full. In the fact the whole place sort of feels like it was recently abandoned by a hoard of first year students. And the front rooms smell very strongly of dogs. Oh well. It’s cheap and we can spread our stuff out and the kitchen’s clean.

After a girl who looked about 15 and was carrying a baby let us in and explained everything we walked a few blocks to a bar called ‘Port of Call’. The vibe was laid back, the music wasn’t too loud and the menu was simple – enormous cocktails with a tropical theme and burgers with baked potatoes. When you order burgers here you often get asked how you want them cooked – like streak. It’s a nice touch but I can’t bring myself to eat pink burger mince. Not yet, anyhow.

The guy behind the bar had an accent like Sam from ‘True Blood’ and was really friendly. He even ended up showing us photos of his dog and an amazing ‘epic meal time’ style construction he’d made of a football pitch and stadium that was made of dip and sausages and meat sticks… it’s a bit hard to explain but we were very impressed. At the end of the night they almost under charged us by about $60 but we pointed it out and the manager gave us a cocktail for free, which was nice. We staggered home and I felt rather sorry for myself the next morning. Lesson learned – you can’t turn your back on New Orleans.

The next day we walked down Frenchman Street and through the French Quarter. All I know about New Orleans I learned from Anne Rice books so I know there’s areas with big mansions, the cemeteries are above ground and voodoo and swamps and all that stuff. So not much, really. Our area looks like an outback Australian town – lots of weatherboard and broken down cars. But then it also kind of looks like Priscilla had swept through and so lots of houses are painted really brightly and there’s mardi gras beads hanging from doorknobs and railings. It’s quite charming.

Although we’ve been warned about the streets being dangerous we’ve not seen anything untoward as yet and I’ve only heard one siren, which is a nice change from New York. People say ‘Hi’…or rather ‘How y’all doin?’ when we walk past and the lady at the supermarket somehow managed to use the word ‘darlin’ 50 times in the space of two minutes.

Speaking of shopping, we went into a pharmacy and were taken aback by the fact that the first thing we saw upon entering was an enormous row of alcohol and bottles much bigger than you get at home. There were two litre bottles of Smirnoff for $20! But… in a pharmacy. Not something I’ve seen anywhere else around the world. Only in America?

A super stylish old car in our street.

Whoah. Since we got here I feel as though we’ve barely stopped moving. New York is probably supposed to be like that. But before I start a long and envy-inducing list of what we’ve been doing and my first impressions, let me tell you what happened in London.

We spent a last morning shopping in Camden (when I say ‘we’ I mean I shopped and Luke watched – he’s good like that) and I bought a couple of last piecess of funky clothing. I also had a heart-stopping moment where I tried on a skirt that was labelled ‘Large’ and it didn’t fit over my knees. The shop guy and I then held it up against some smaller sized clothes and realised it was mis-labelled. Whew.

Then we went back to our adorable English pub, grabbed our bags and got to the airport about 4 hours before our flight was due to take off. Sometimes being a super early person has its advantages – when we got to the counter the lady said our flight had been delayed by 4.5 hours but the earlier flight, departing in 40 minutes, had space and we could jump on that. Win! So we half ran through the airport after Luke got stuck in security for no reason apart from his bag being full of electrical cables, and were the last ones on the plane.

We flew United, which I’d heard bad things about but it was actually a nice flight, apart from the alcohol costing money (in retrospect this was probably a good thing) and the food was nice, there were lots of films to choose from and, my favourite, the window rows had only two seats, so no being jammed in with a smelly stranger.

The plane even arrived half an hour early and we found that scary US customs involves some guy asking what’s in our bags, me saying ‘wine’ and him waving us through without even looking. We didn’t even get asked how long we were staying for, whether we had visas or were planning on working… nothing! UK customs are waaaay more intense.

We caught a bus into the city and found our accommodation pretty easily. We’re staying in a 4th floor walk up (blurgh) apartment in Greenwich, one of the more bohemian areas of NYC, for one week then we’re off to Brooklyn for a week. I might save first impressions of New York, and our catch up with friends for the next post. Right now I need to rub my sore feet and work out where to buy some more yarn for my crocheting. I made 6 squares while on the flight over – it’s so addictive. I just wish I’d started out with colours that matched anything in my house.