We only spent a day and a half in Dublin but we did a bunch of stuff!

We stayed at a pub/hostel that was a bit grotty but the location was great. 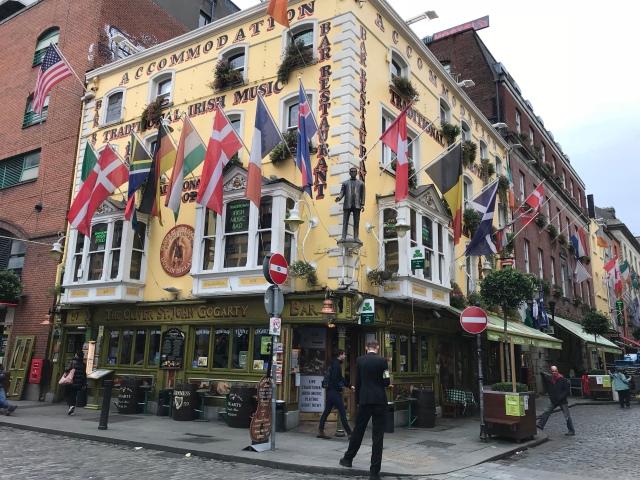 We visited the National Portrait Gallery. 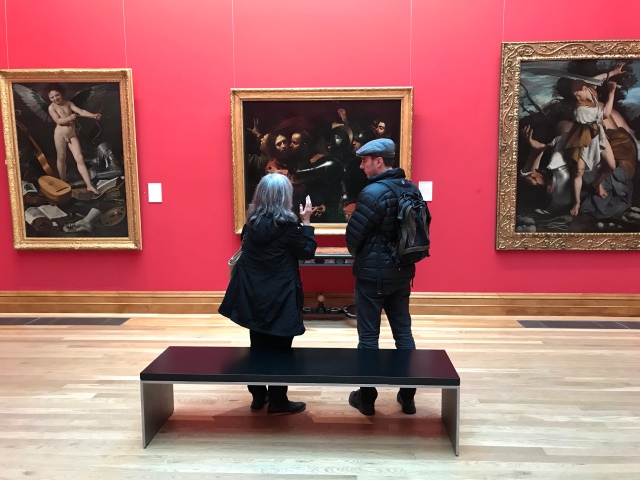 Jess went on a Viking bus/boat tour and a walking tour while Luke and I walked around town and then sat in a pub (just for something different). We did see the statue of Molly Malone. 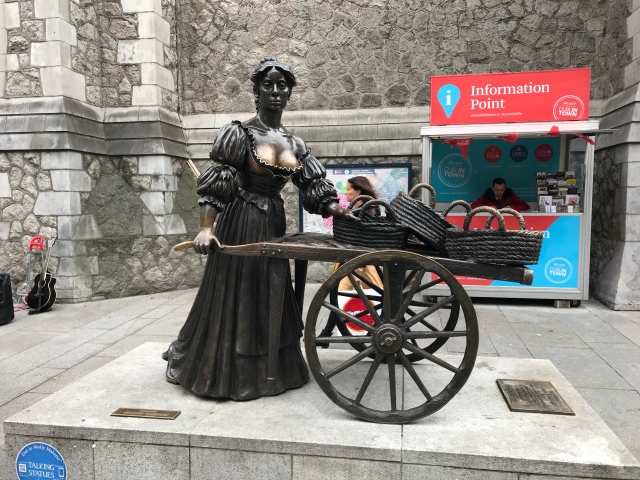 Guess which bit you rub for luck? 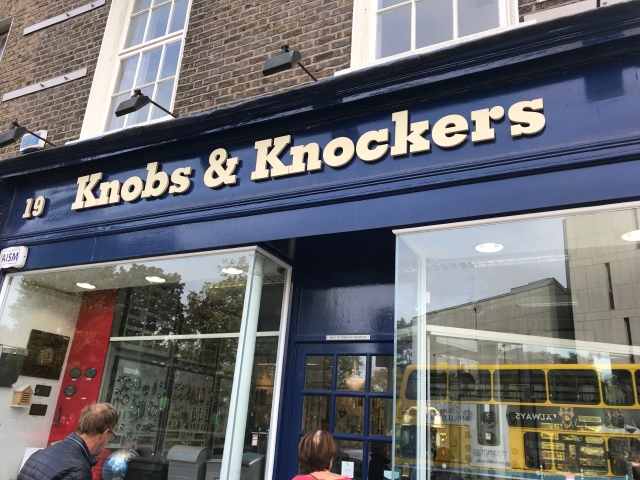 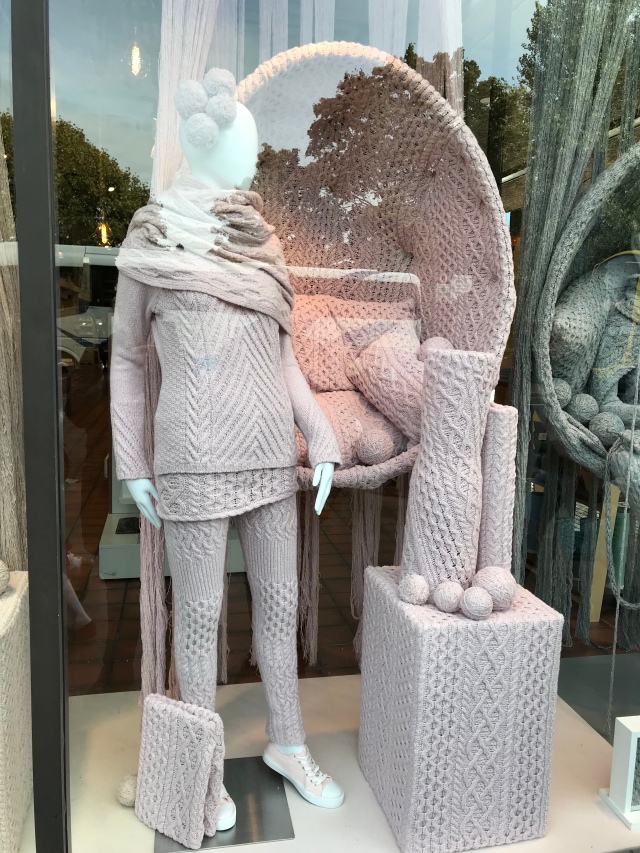 We also went to a comedy night – there is so much comedy in Dublin! If we’d known we might’ve booked tickets to something decent. As it was we saw three guys in a basement and they were ok. In the same pub there was a ukulele jam happening. People brought ukuleles and were given music books and all played along together. It was funny to watch.

Hrm… actually, we didn’t actually do all that much as there wasn’t much time. We enjoyed Dublin though and were looking forward to another fun ride on the ferry back. We ended up with the same kitchen crew as the way over and they remembered Jess was a vegetarian, which was pretty impressive. We slept a lot better as the sea was not as rough.

Next: driving through the Cotswolds and staying at Makeney Hall.

If you’re on a Dragoman overland tour, one thing you’ll quickly become accustomed to is the regularity with which you must set up and pack down tents, at all times of the day and night. Your tent skills are highly important – they can make or break your enjoyment of the trip!

Thanks once again to Pete for giving us his footage to use. I am glad we could immortalise such epic tent packing skills for future generations. 😀

Our first morning in New York we wandered out into the street feeling, as we’ve said many times now, like we’d wandered onto a movie set. Yellow cabs! Yellow buses! Brand names we recognised but have never eaten/shopped at! People in Halloween costumes! It was all so new and yet so familiar. Actually, apart from the iconic stuff, the area where we’re staying looks a lot like Melbourne – hipster cafes, vegetarian restaurants… it’s like a giant Fitzroy but with stoops and subway stations.

Our apartment even has one of these retro/racist dime-store Indian statues out the front. Reminds me of Seinfeld every time we arrive home.

We had breakfast at an old-style deli, replete with an entire staff of old men. Since that meal I’m yet to see a woman doing anything more than cashiering at a deli. What’s with that? The meal we had was ok and the establishment was charming – swivel seats along the chrome counter, booths etc. Next we acquired a phone card. This was probably the highlight of our service experience in the first three days. All the staff were smiling and having fun and were very polite and pleasant. I cannot say the same for most other places, particularly eateries. You’d think smiling at customers cost money here. Then we walked north. We found the Flatiron Building, which looked great but the sun was in the wrong spot to get a decent photo. Then we walked through the library. We got up to Times Square, which was pleasingly gaudy and over the top. So many flashing signs – it was more Tokyo than Tokyo.

We bought comedy tickets from a guy on the street as seeing a comedy show was pretty high on our list of things to do. After escaping the rain in a slightly grotty deli we walked back down to Greenwich. Lots of people were on the streets dressed in their Halloween costumes. I had a secret hope that this was actually a normal New York day but sadly it was not, and the following day everyone was back to their all black uniforms. A bit like Melbourne, really. Anyone with a bit of colour really stands out in the crowd.

This lady is out to prove even New Yorkers aren’t immune to fashion faux pas. Double denim? Sister, please!

That evening we met up with Luke’s friend Sean, who has come down from Montreal to see the city and hang out with us a bit. We had a drink at the bar downstairs from our apartment and then walked a few blocks over to watch the Halloween parade. It was not at all what I expected. I’d thought, this being America, that it would be all glitz and glam and big budget. But it was quite the opposite. There wasn’t even much co-ordinating of dance or costumes. Mainly the parade consisted of people in their home made stuff walking along between floats sponsored by radio stations or local businesses. The best group was the first lot, who had done a Pink Floyd arrangement of mechanical rabbits and flying clocks.

One of the less blurry photos.

After an hour and a half and a whole lot of blurry, hand-held photos, we fought our way through the crowds and found a table at a nice restaurant and had a chat over dinner. Then Sean made his way home and we collapsed into bed.

The first thing we did the next day was meet up with my friend Robert who was, fortuitously, in NY for a couple of days, visiting from Oakland (and hopefully we’ll get to hang out some more there). I’d never met Robert in person before but we’re friends through blogging and other mutual friends… it’s a long story. It’s hard to explain to people who don’t have friends online how you manage to stay in contact with people for over a decade and yet never meet in person – you’ve either done it or you haven’t. Robert turned out to be just as lovely in person as online and we all got on very well. We had breakfast at a place he’d found and I tried ‘corned beef hash and eggs’. Corned beef hash is basically chopped up silverside that is then fried in a big mess. It tasted fine but looked kind of like it’d already been chewed. We were given complimentary orange juices but they were the tiniest juices I’ve ever seen – only slightly larger than shot glasses. It was weird.

After food we walked across the Brooklyn Bridge.

All the perspective lines!

Somehow, after drinking more coffee than I thought was possible, Robert seemed to grow increasingly tired. Then after we had a sit by a fountain and a chat and said goodbye, Luke also felt really tired. He’d had four coffees, so obviously he’d gone through the point of super awakeness and out the other side. He did say he felt NQR.

We caught the subway back and had a rest. It’s a bit sad that I need so much rest time but I feel that it’s better to just face it and have lie downs rather than burn out. Besides, we had a comedy show to get to that evening.

We walked up to the comedy show, getting a bit confused by the directions the guy who’d sold the tickets had given us. He’d pointed north west from his spot in Times Square and saying ‘just over there’. In actual fact it was 10 blocks further north. We’re staying further south than 1st Street and the comedy show was on 53rd street. It was quite a walk. Fortunately the north-south blocks are pretty short but it was still about 5kms away.

Before the show we met Sean for dinner. He’d been ticking off the sights he wanted to see but warned us against the Guggenheim, saying it was pretty boring. He wanted to spend the evening planning and declined a free ticket to the show – possibly a good idea as it was not at all what we’d been led to believe. The guy we’d bought the tickets from had said it was a taping for Comedy Central but it turned out to be four stand up comedians who were ok – one was pretty funny and looked kind of familiar. One of his best bits was about toilets. I laughed a lot but I’m starting to think I’m developing some kind of weird toilet obsession because everywhere we go the toilets are the thing I want to write blog entries about. I wished I’d been tagging all the posts where toilets are mentioned so I could check on whether it’s getting to a disturbing level.

Anyhow, the show! It was a small stage in a basement and you had to buy two drinks, which were pretty expensive. The ticket to get in gave you an extra entry for free but with drinks it worked out to be about $30 each. We looked online afterwards and the reviews for ‘Broadway Comedy Club’ weren’t great. We’re going to try to find somewhere different and hopefully see something better. Annoyingly, it’s ‘Comedy Week’ here right now but we didn’t know so we didn’t buy tickets to any of the really great shows that are on. D’oh!

We caught the subway home. It was packed – I stood next to two guys who’d just been to see an MIA concert and were covered in coloured powder. They were very friendly, unlike the people who sounded like they were about to punch on at the other end of the carriage. Despite the subway stations here looking like entrances to hell’s prison (bare concrete, everything looks dirty and there’s bars up to the ceilings to stop people getting on for free) it seems like a pretty easy system to navigate, even if the numbered and lettered lines are a bit sad after the elegant (Angel, Victoria) and hilarious (Cockfosters, Mudchute) names of the London underground stations. Plus here you don’t have to swipe your card upon exiting the station. How eminently sensible. We tumbled into bed, once again exhausted.