I caught the bus from Ambleside to The Old Dungeon Ghyll Hotel, a place I’ve heard a lot about as it appears on many UK hiking blogs. Because the first bus didn’t leave Ambleside until 9:30 and didn’t get to TODG until 10:30ish I didn’t go inside and now I’m kind of sorry. At the same time that day turned out to be the hardest slog yet so I’m glad I didn’t hang around. 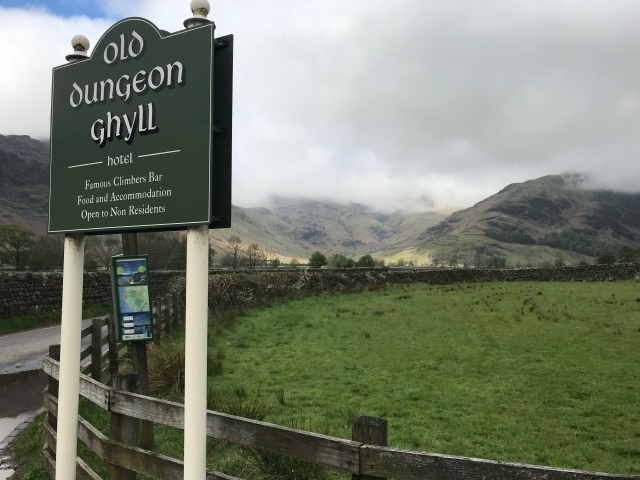 The Langdale Valley on a sunny bank holiday Saturday is less a peaceful stroll through a stunning valley and more a walk along a busy high street. So many people! More than I’d seen on all the walks I’d done previously put together. At the end of the valley the track splits off in several directions though so that helped thin the hordes. Also at the end of the valley were a trio of mountain rescue vehicles and I learned from a conversation later in the day that it definitely wasn’t a drill and they’d been there since 8am. No idea what happened though. 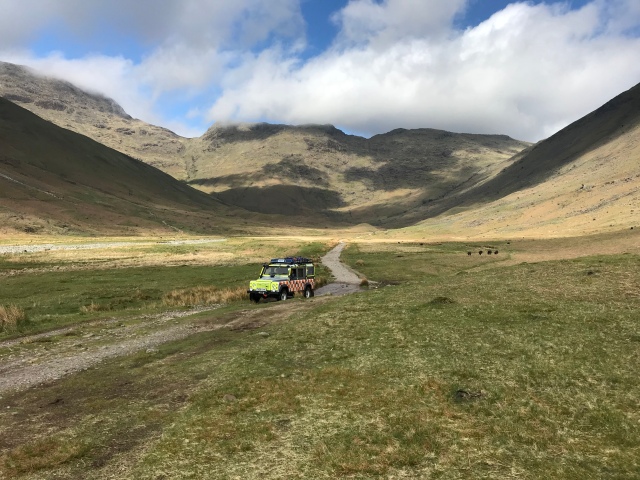 As I faced the steep wall of Stake Pass I stopped thinking about other people and mainly started feeling sorry for myself. No one else was carrying a huge pack and it looked like maybe 1000 steps or more to the top, most of them moderately steep and all of them uneven.

I did find, once I got going, that is wasn’t so bad. Because the path had water running down it (they almost all do) and I had to look at every step for footing, I only ended up stopping a few times and with the view getting better and better, it was exciting to climb higher. I’ve never been great with heights but I think this experience is definitely helping me take more risks and be brave. I know some people would bound up stairs like that but for me it was a challenge. When I got to the top I felt like I’d conquered the world. 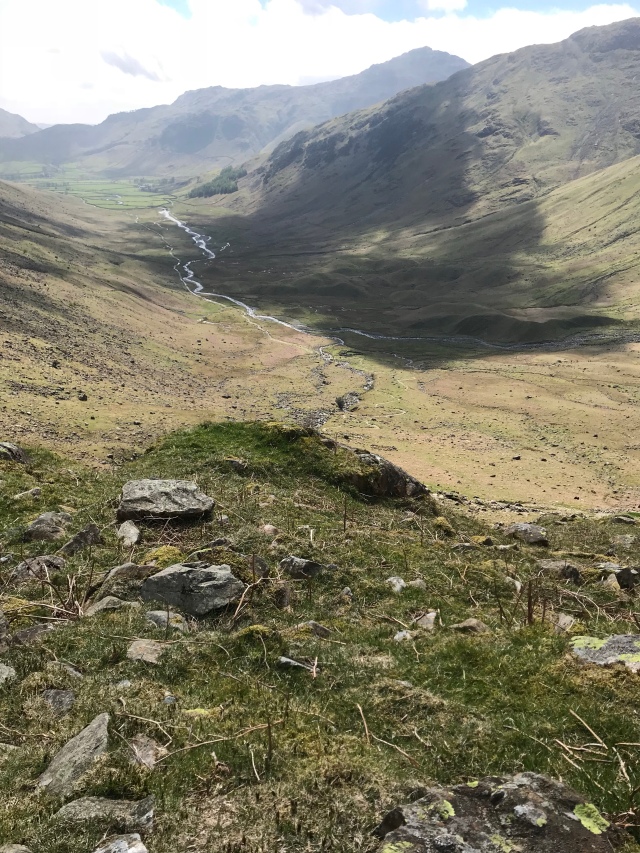 Over the top was an open grassland area for a short space. It was up here I met a group of uni students from Preston University. We swapped Instagram details at their insistence, then it was down into Borrowdale. Instead of uneven stone steps the path was loose gravel, which is my least favourite surface. I ended up walking on the grass edges on the narrow path that wiggled back and forth. I stopped halfway down and cooked some pasta (taking the advice of several people to actually have decent break when I felt tired) and while I did a man from, of all places, Redcar, came past. This was funny for me because Redcar is a tiny town in Yorkshire and Luke and I stayed in the nearby town of Saltburn last time we were here. The people we stayed with had nothing good to say about Redcar and made this point quite a number of times. Then I meet this guy and he said exactly the same thing. 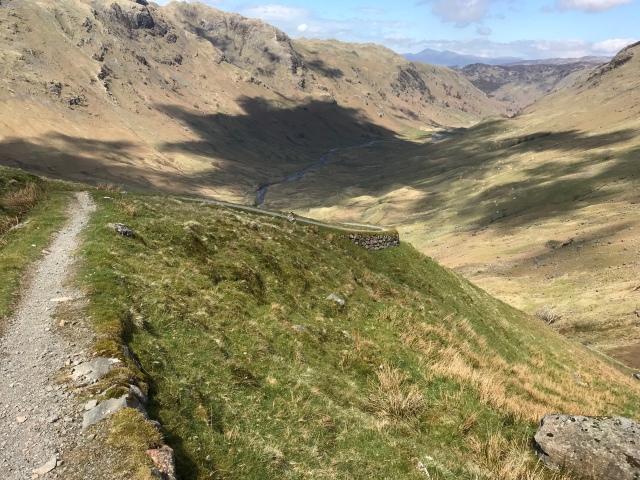 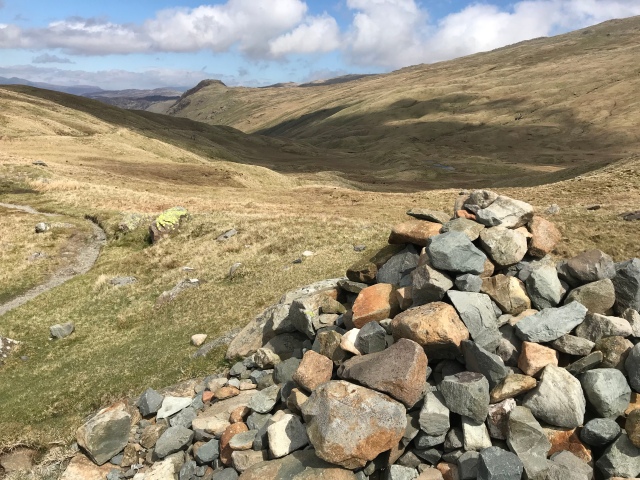 We had a chat about things other than Redcar and he told me I should definitely do some wild camping at some stage and I agreed (we’ll see) then he moved on. I slowly inched my way down the slope and then struggled along the rocky and muddy valley floor. This was the point that I finally gave up trying to keep my feet dry and just walked through the mud. Within about two kilometres there were about 20 streams to cross and I managed most ok but it was slow going. I met an older couple (I should start tracking how many times I use that phrase) who told me this was as dry as it gets and quite often water is sheeting down the valley walls. Christ almighty. 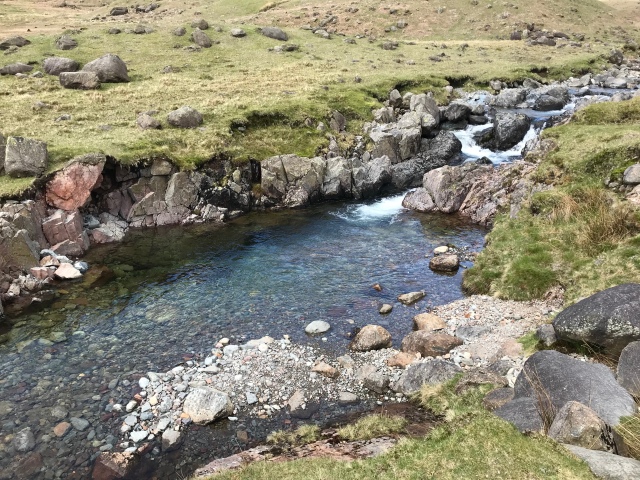 The water was beautifully clear though.

I decided, as I always do, to stop at the first campsite I came to. It was pretty basic and so busy it looked like there was a music festival going on. I pitched my tent then went in search of the closest pub and had a pint of cider in their sunny beer garden. Lovely! 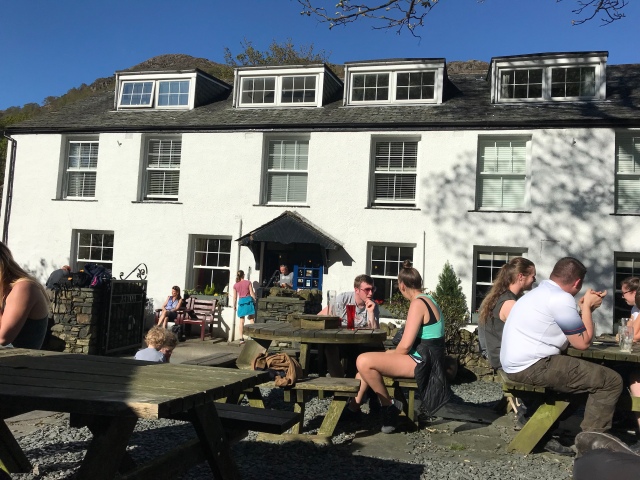 7 thoughts on “Langdale to Borrowdale: My Second Encounter With Mountain Rescue.”