Feeling like a miniature Plitivice Lakes, Krka National Park has one additional benefit, which is that it allows swimming! The water was too cold for me, but certainly not for the scores of tourists and locals who come here to cool off in the summer months. We were happy enough just wandering the paths, looking at the lakes and falls. 🙂

Click here to read Amanda’s entry about this part of our trip!

If you like waterfalls, you’ve come to the right place! Plitvice Lakes National Park in Croatia is one of the top places to visit for any waterfall lover, and I’m sure you’ll see why. Lush surroundings abound, with plentiful falls of every size plunging in to lakes of turquoise water. The trails around the park are very well kept – and well trodden! All in all, one of our favourite spots in Croatia. 🙂

Click here to read Amanda’s entry about this part of our trip!

From my hardest day to the easiest. The walk from the campsite through the tiny but charming village of Grange, all the way to Keswick, was like a walk through a park. I even bought an ice cream in Grange as the sun was so warm. The flavour was ‘chocolate toffee explosion’ or something equally exciting. Totally worth paying over two pounds for one rather small scoop. 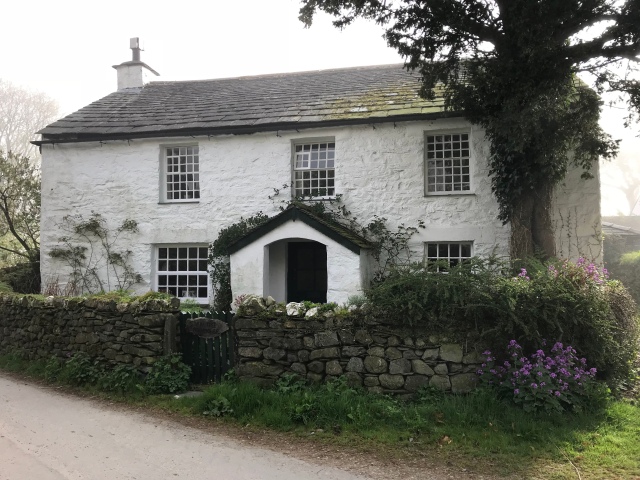 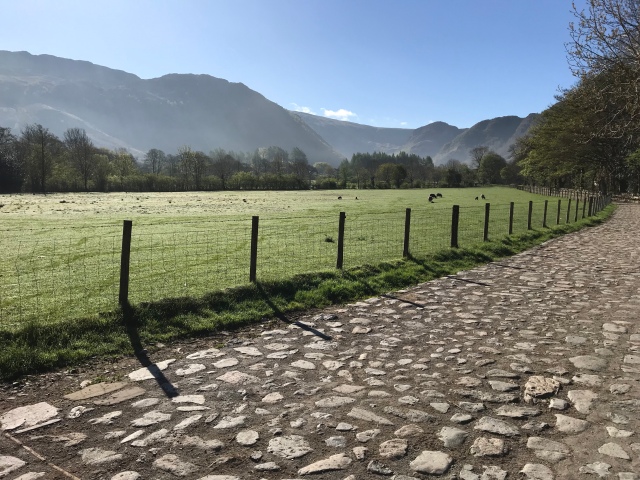 I chatted to an older couple (you’d think there was no other type of people in this area, that’s how frequently I meet them) who told me that the Borrowdale Valley is often thought the prettiest square mile in Cumbria. I don’t know if that’s precisely true but it certainly wasn’t bad at all.

I stopped for an early lunch by an abandoned slate quarry and had a wander through.

On my first day in Ulverston I bought a chunk of cheddar to take with me on my walks and it lasted a surprisingly long time, especially since I didn’t have it in the fridge at all. Well, I mean night times were fridge temperatures, but it survived the days too. I would cut off bits to mix through couscous and it wasn’t a bad meal with an apple on the side. I am also loving my soft water bottles. They fit into any space in my bag and take up no room when they’re empty. I’m glad I chose those rather than the hard sort.

Most of the rest of the day was taken up with meeting two more older couples. The first couple took my photo.

I think I look sort of happy-yet-pathetic in this picture.

The other couple were American and we talked and walked for about an hour and then we got to a little village right before Keswick and they bought me lunch! It was incredibly kind and I think I reminded them of their children, one was born the same year as me. They told me that if I couldn’t find accommodation I should come to their cottage and they would be happy to let me sleep on the couch.

People have been so generous and friendly and kind to me so far, I really can’t get over it.

I waved them farewell and headed to the lakeside campsite and found they had tonnes of room. I pitched my tent and revelled in the sunshine.

Here’s a few more photos from the day.

The guidebook I bought for the Lake District years ago did not have nice things to say about Coniston. It basically implied it was a tiny mining village with little to offer. Times must have changed if property prices are any to go by. 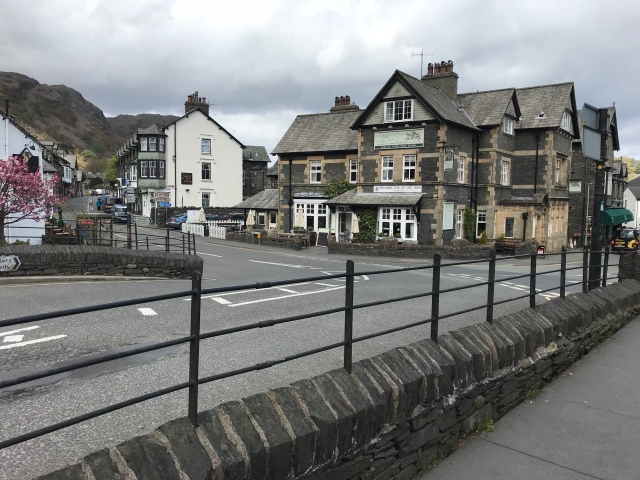 One of the main intersections in Coniston.

Actually Coniston has a number of historic pubs, beautiful views, a useful range of shops and most of the accommodation, if booking.com is anything to go by, isn’t cheap. A lot of the houses in the village are built of stone and have that dark, brooding gravitas that slate lends to a place. I really like it. 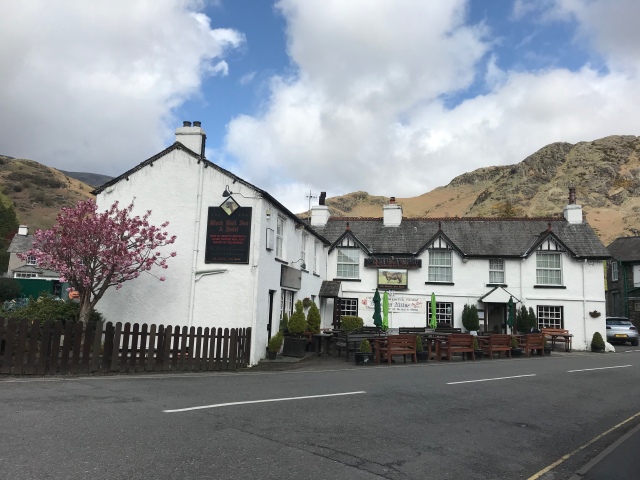 I decided, on my one full day here, to go for a boat ride around the lake then go and look at Brantwood, the home of John Ruskin. The only other person staying at the pub is an American fellow who is an historian with an interest in John Ruskin so he told me a little at breakfast and then I ended up seeing him at Brantwood later in the day.

I walked down the hill to the lake and did a little Facebook live video while I waited for the boat and went for a walk. Being a teacher, I’m perfectly happy to drone on at length about nothing in particular, although I did find myself talking about socks and wondering if anyone was still listening. When I listened back to it I realised the wind noise was unbearable but lesson learned, I will do them indoors or on still days from now on.

I had meant to go on the steam boat but this was the only one there when I got to the dock.

I was the only passenger on the boat so I had a private tour and enjoyed asking lots of questions and getting a more personal insight into the area. We motored past the island that features in Swallows and Amazons, which is a series of children’s books and two movies and is apparently a big deal even though I hadn’t heard of it until I read my guide book. I have downloaded the first book though and will read it next.

The boat dropped me off at Brantwood, which is almost directly opposite Coniston on the other side of the lake. It’s a group of buildings where John Ruskin spent the last few decades of his life. He was a great thinker, writer, artist, poet… basically a Victorian renaissance man. He went mad in his later years and it sounded a lot like bi-polar to me. The video introduction, that the man at the front desk insisted we watch, was a bit odd. Apart from having weirdly dramatic synth music playing over the top, it completely neglected to mention any female or non-famous person’s presence in JR’s life. I came away wondering if he’d ever married, which of course was a tip-off that his relationship was scandalous and not entirely happy. The gift shop had lots of books on his wife and her achievements but I didn’t investigate. Really, I was here for the gardens and wallpaper.

He designed this wallpaper himself and JR was a big supporter of my favourite art movement, the Pre Raphaelites. 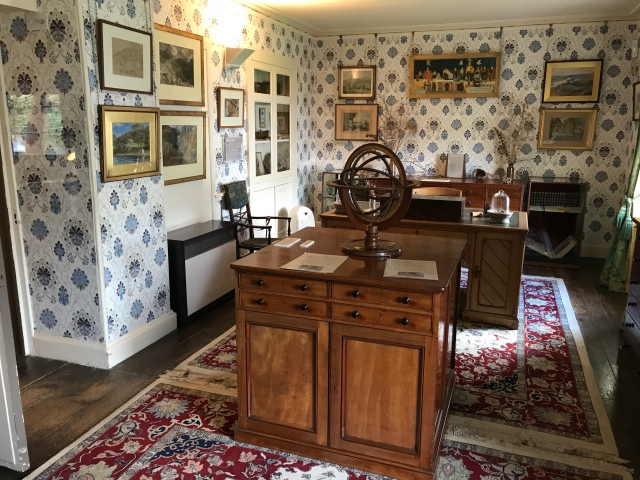 The inside of the house was lovely although insanely creaky. No creeping up on anyone here!

The views from from the windows were stunning in every direction. Forest on one side, lake on the other.

The grounds were supposed to have areas with distinct themes but mainly they were semi-wild with a few bluebells and ferns. From the dock to the buildings was better maintained but I dare say it’s one of those National Trust places where the income doesn’t really cover the upkeep of everything.

John Ruskin’s chair. Surprisingly comfortable in angle but I can only assume he took a cushion or two.

Several people had touted the cafe and it was indeed very nice. I had a carrot and honey soup. After the oversized breakfast at the hotel, soup seemed like a good choice on a cold and relatively sedate day. 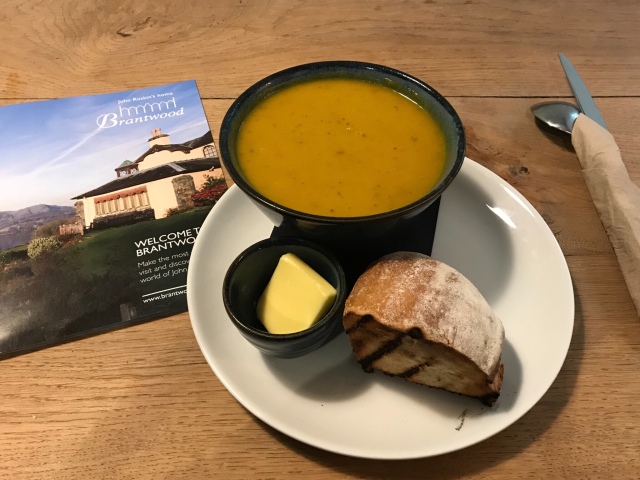 All in all a very pleasant day where I learned, looked and listened. My feet and shoulders enjoyed the break and by evening I felt almost ready to tear myself away from the cloud-like comfort of my bed at The Sun. Onwards and upwards tomorrow!

We left Lake Louise early (have I mentioned my tour group are ALWAYS on time? I love these people) to get to Moraine Lake, which is just down the road. When we turned in there were many, many cars and motor homes and whatnot. Which is the tourism paradox, I suppose – the more beautiful a place is, the more you want it to yourself, the more people you’re going to have to contend with.

Anyhow, it wasn’t too bad, we took photos, had a wander then got back on the bus. I didn’t realise that there was a short walk up a hill, and that the height showed the jade colour better. I’m sure if you want to see it there are about five billion photos elsewhere online. Here is the reverse view from the above photo.

We made a few stops during the drive that day on the way to Kelowna (cologne-a). Including a rest stop where we spotted this guy and his huge ass!

We passed through very smoked valleys, but then emerged from the haze and were back to corn fields and wider skies. We also spotted a BEAR!

I realise how bad this photo is, but it was copied over to me from someone else’s camera (thanks Wayne!) then blown up, but it was a real, wild bear! It was on the edge of a corn field. It looked at us for a bit then wandered off into the forest, which is what I’d do if I spotted a big tour bus.

After that excitement no one was sleepy. We stopped off for ice cream (I had maple syrup and also a giant punnet of raspberries that were OMG delicious), then got to our hotel. A quiet night ensued. I mean, my nights are always quiet, but Mum also went to sleep reasonably early too for a change. holidaying with a party animal is a challenge, but I’m coping like a hero.

Next: Whistler and float planes and other stuff.